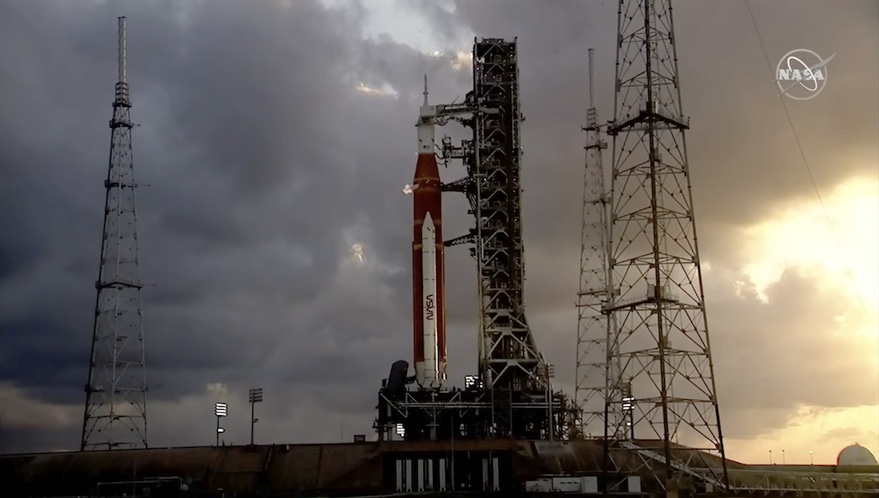 WASHINGTON — NASA came within 20 seconds of completing a full countdown rehearsal of its Space Launch System rocket June 20, although it was not immediately clear if the agency got enough data from the test to be able to proceed with a launch.

After five hours of delays caused by various technical issues, the countdown for the fourth wet dress rehearsal (WDR) of the SLS at Launch Complex 39B made it to T-29 seconds, several seconds beyond the point where control was transferred from ground to flight computers, before the computer saw a “flag” and stopped the countdown at about 7:37 p.m. Eastern.

NASA originally hoped to get the countdown to a manual cutoff point of T-9.3 seconds, just before, on an actual launch, the vehicle would ignite the four RS-25 engines in its core stage. However, NASA TV commentary stated that they expected to see a flag at the 29-second point in the countdown.

That terminal count took place about five hours later than planned because of technical issues, including a liquid hydrogen leak in a “quick disconnect” fitting for an umbilical line that transfers that propellant from ground systems into the core stage. Efforts to stop the leak, including warming then cooling the fitting in the hopes of resealing the connection, failed. After lengthy deliberation, NASA managers elected to proceed with the terminal countdown from a preplanned T-10 minute hold after taking steps to mask, or hide, the warnings about the leak from computers.

“We were always protected in the flight software so we knew that we had protections there,” launch director Charlie Blackwell-Thompson said on NASA TV shortly after the end of the test, when asked about the decision to proceed with the countdown despite the leak. Launch personnel were monitoring the vehicle closely. “I felt like we were in a really good configuration to continue to get into terminal count and see how the hardware performed.”

The hydrogen leak, which was not related to the leak seen in a previous WDR in April, was the most serious but not the only issue that came up during this test. NASA delayed the start of tanking of the core stage by about two hours because of a problem with a valve in a backup gaseous nitrogen line serving the pad. Later, loading of liquid oxygen into the SLS upper stage was halted for a time after hitting a pressure limit. There was also a small grass fire near a flare stack in the vicinity of the pad used to burn off excess hydrogen.

Those problems and the delays they caused led to changes in the countdown rehearsal, scrapping a plan to stop the countdown at T-33 seconds, recycling, then going again to T-9.3 seconds. However, this WDR got far closer to completion than three previous attempts in April, and marked the first time the vehicle was completely filled with liquid oxygen and liquid hydrogen propellant at the pad.

“That was a big milestone for us,” Blackwell-Thompson said of fueling the vehicle. “Definitely a good day for us and a very exciting day as well.”

It’s unclear if the day was good enough to meet all of NASA’s requirements for the WDR and allow the vehicle to go back to the Vehicle Assembly Building to prepare for a launch that could take place as soon as late August. She declined to speculate on what this test meant for launch plans, saying the launch team was focused on reviewing the data.

At a June 15 briefing, Jim Free, NASA associate administrator for exploration systems development, was asked what NASA would do in a scenario like this, where it could perform only one of the two planned terminal countdowns. “We need to understand everything we can before we commit to launch,” he said. “My first caution is to say we’re going to understand what every situation is and run it to ground before we would press to commit to launch.”

“To me, it would depend on what the scenario was,” Blackwell-Thompson said at that earlier briefing, noting the agency would evaluate the data and any “residual risk” from not completing the full WDR. “It’s hard to speculate without the specifics.”

Energy prices have dipped, but oil stocks are still a buy, investor says
Iguanas That Went Instinct 200 Years Ago, Has Been Found by a Team of Conversationalists
NASA heliophysics smallsats to share launch with astrophysics mission
Audi EV models featured in hit Netflix film, plans to ramp US EV output
Electric F-150 Lightnings save the day with power in Kentucky flood response