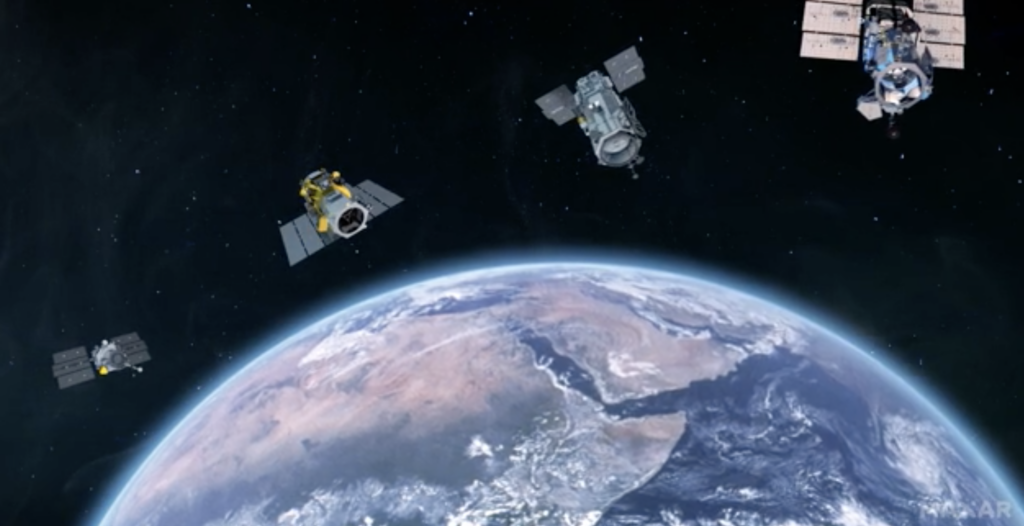 ST. LOUIS — Maxar remains confident that it will launch all six of its next-generation WorldView Legion imaging satellites in 2022,

“We anticipate all six to be on orbit next year,” Tony Frazier, Maxar’s executive vice president of global field operations, told SpaceNews at the 2021 GEOINT Symposium.

Frazier said he could not provide specific target launch dates for the first launch of a batch of two satellites, and a second batch of four satellites, both aboard SpaceX Falcon 9 rockets. Up until a few months ago, the company had projected that these launches would happen in 2021. In August Maxar CEO Dan Jablonski revealed to investors during an earnings call that the first launch was being delayed to 2022.

“We’re still on track” with that plan, said Frazier.

The $600 million constellation has been difficult to build, he said. “It is a complex program,” Frazier added.

The satellites are being built by a Maxar-owned manufacturer formerly known as Space Systems Loral. When DigitalGlobe (now Maxar) built its legacy WorldView imaging satellites, they were produced one at a time. Scaling up to six “is not trivial,” said Frazier.

The complexity of producing six advanced spacecraft at the same time is just one issue that has contributed to the delays, he said. There’s been setbacks with suppliers being late delivering key components. COVID-19 also disrupted the schedule.

Legion satellites are smaller than the earlier generations so miniaturizing electronics while maintaining the performance of the high-resolution optics and keeping cost under control “was not a trivial challenge,” he said. “All those factors I think drove further complexity into the middle of a pandemic.”

The success of WorldView Legion is key to the company’s future as it seeks to continue its dominance of the U.S. government imagery market and expand its commercial business.  With six new satellites in addition to its existing four, Maxar will be able to collect imagery of some regions on Earth more frequently.

“We’ll be able to maintain  customer expectations for 30 centimeter resolution imagery, but we’re going to be able to dramatically increase the revisit rate of our constellation,” said Frazier.

When U.S. forces withdrew from Afghanistan, “we were able to see certain areas once or twice a day,” Frazier said. “With Legion, we’ll be able to see those same areas over 15 times a day.”