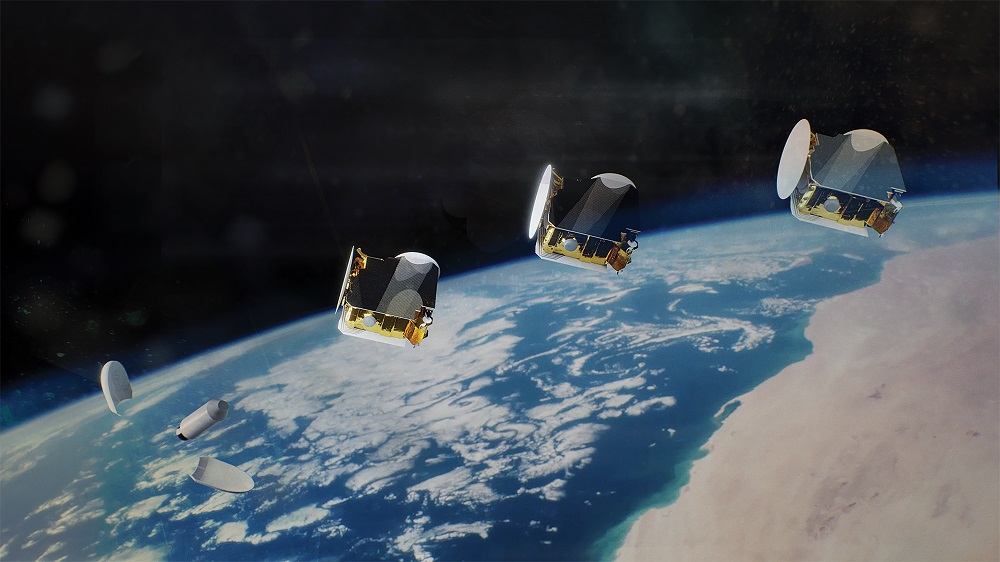 Commercial orders of geostationary communications satellites have reached double-digits for the first time since 2016, but a return to former buying rates remains unlikely, experts say.

As of Aug. 30, commercial operators had ordered 10 multi-ton GEO communications satellites this year, up from five for all of 2018 and seven in 2017. Manufacturers had grown accustomed to market demand of 15 to 20 such spacecraft annually, and sometimes more. While optimistic about 2019’s buying rate, experts say this year’s uptick is more a reflection of how tough the last few years have been than indication of a full market recovery.

“It doesn’t feel like this is anything beyond replacement orders and experimental orders with some of the small GEOs,” said Chris Quilty, whose firm Quilty Analytics tracks satellite orders. “The animal spirits have not yet returned among the traditional GEO operators.”

Manufacturers have backed away from citing GEO orders as a barometer for industry health, since the types of satellites operators are buying has become more varied. For example, 2018 had seven GEO orders but two of those — GapSat selecting Terran Orbital for a 250-kilogram satellite and Ovzon picking Maxar Technologies for a 1,500-kilogram satellite — fall into the newly popular small GEO category. While small GEOS share the same orbit as traditional communications satellites, they serve smaller markets and are significantly cheaper to build and launch.

At the opposite end of the spectrum, heavyweight GEOs also complicate the annual order tally. Maxar Technologies has described the 500-Gbps Jupiter-3 satellite ordered by Hughes Network Systems as equal to building three regular GEO satellite orders. Meanwhile, Hughes’ competitor Viasat is taking on some manufacturing responsibility itself by building its own payloads for its ViaSat-3 constellation and hiring Boeing to supply the spacecraft bus, structural components and integration services for three 1-terabit-per-second satellites.

“Just looking at it by number of satellites doesn’t make as much sense anymore because the satellites are changing,” said Amer Khouri, head of Northrop Grumman’s commercial satellite division.

Northrop Grumman and other manufacturers are measuring the remaining lifetimes of on-orbit satellites in an effort to gauge a minimum level of demand that assumes operators do no more than replace existing assets. Khouri estimated that 20 to 30 GEO satellites will retire over the next five years. Not all of them will be replaced one-for-one, he said, but enough will to generate demand.

“The best prediction right now is I think we are going to continue to see double digits every year,” he said. “I don’t think it’s going to be close to 20; it’s most likely going to be somewhere between 10 and 15.” 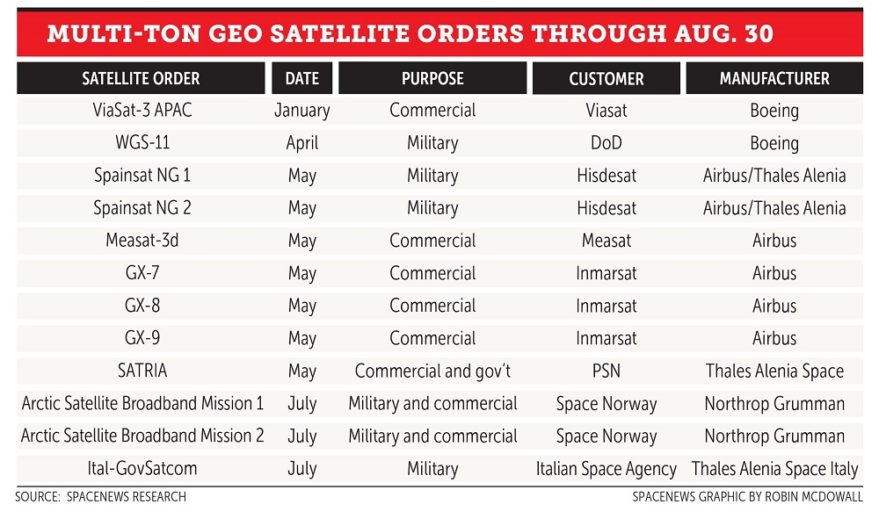 Airbus and Thales Alenia Space executives predicted at last September’s World Satellite Business Week in Paris that 10 to 18 GEO satellites will be ordered annually for the next few years.

One factor that could result in a bumper crop of GEO orders is if the U.S. Federal Communications Commission accepts the C-Band Alliance’s spectrum plan to repurpose 200 megahertz of C-band spectrum for 5G wireless networks. The C-Band Alliance said its two biggest members, Intelsat and SES, would buy four satellites each to replace lost capacity — all from American suppliers.

Intelsat and SES are already working on other new satellite orders. Intelsat wants to replace Intelsat-29e after its unexpected failure earlier this year and SES wants to expand its broadband connectivity services. Telesat is also expected to choose soon between Airbus Defence and Space and a team formed by Maxar Technologies and Thales Alenia Space to start building its 300-satellite LEO broadband constellation.

This article originally appeared in the Sept. 2, 2019 issue of SpaceNews magazine.

Raymond sworn in as the first chief of space operations for the U.S. Space Force
How Doctors May Be Spending More Time With Electronic Health Records Than Patients
Pentagon official: U.S. Space Force reorganization should not slow down acquisitions
What’s For Dinner? For Hammerhead Sharks, It’s Family!
Super Solar Storm? Amazon’s Fostering Warning Apps For That