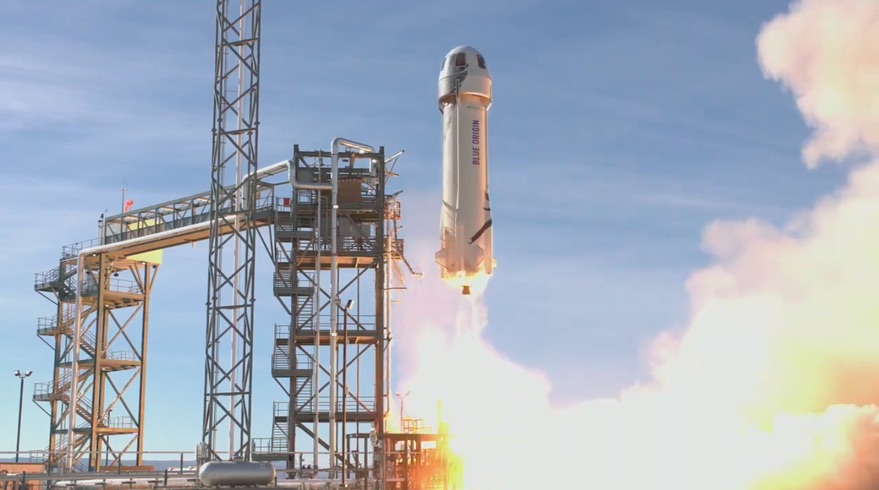 WASHINGTON — The Federal Aviation Administration says it is reviewing allegations about safety issues at Blue Origin raised in an explosive essay by a group of current and former employees.

In an essay published on the website Lioness Sept. 30, the group of 21 current and former employees, most of whom are anonymous, claimed than an effort by company leadership to increase the flight rate of its New Shepard suborbital vehicle was “was seriously compromising flight safety.

“In the opinion of an engineer who has signed on to this essay, ‘Blue Origin has been lucky that nothing has happened so far,’” it states. “Many of this essay’s authors say they would not fly on a Blue Origin vehicle.”

An FAA spokesperson told SpaceNews that the agency “takes every safety allegation seriously, and the agency is reviewing the information.” The agency did not elaborate on the nature of the review or investigation, or if the agency was aware of any safety issues on previous New Shepard flights.

The essay offered few specifics beyond concerns that the company was not giving enough resources to teams working on various vehicle systems. It noted that, in 2019, the group working on an unspecified New Shepard subsystem “included only a few engineers working long hours” and whose work “went far beyond what would be manageable for a team double the size.”

The essay also warned of pressure from company leadership to increase the vehicle’s flight rates, with a goal of more than 40 launches a year. “Some of us felt that with the resources and staff available, leadership’s race to launch at such a breakneck speed was seriously compromising flight safety,” they wrote.

New Shepard flew only three times in 2019 and once in 2020. Blue Origin has conducted four New Shepard missions so far in 2020, using two different vehicles, one designed for payload-only flights and one for flying people. Blue Origin made its first, and to date only, crewed flight July 20.

The essay comes less than two weeks before the next New Shepard crewed flight, scheduled for Oct. 12 from the company’s West Texas launch site. Blue Origin announced Sept. 27 that Chris Boshuizen, co-founder of Planet, and Glen de Vries, vice-chair of life sciences and health care at Dassault Systèmes, will be on the flight. The company has not disclosed the other two participants.

The safety concerns are just one part of the essay, which alleges a toxic work environment at the company, particularly for women. “Numerous senior leaders have been known to be consistently inappropriate with women,” the essay states, describing “a particular brand of sexism” at Blue Origin.

Company executives also enforced a “suppression of dissent” from employees, the essay claims. That ranged from limiting questions at company town halls to keeping lists of employees who are “troublemakers or agitators” and even forcing out critics. Those efforts, the group argues, impact safety.

“Today, Blue Origin is selling seats on rockets, stating ‘safety is their top mission’ despite the fact that very few regulations are in place to ensure that is truly the case,” they wrote. “Internally, many of us did not see leadership invest in prioritizing sound systems engineering practices.”

The essay’s publication was part of a coordinated media push that included an article in Fortune magazine, which had access to an advance copy, as well as an appearance on CBS Mornings by Alexandra Abrams, a former head of employee communications at Blue Origin and the only public signatory of the letter.

“I would not trust a Blue Origin vehicle going to space,” she said in the CBS interview.

In a brief statement, Blue Origin said it had “no tolerance for discrimination or harassment of any kind” and that it “will promptly investigate any new claims of misconduct.” It added that it fired Abrams after “repeated warnings for issues involving federal export control regulations,” a claim she denies.

“We stand by our safety record and believe that New Shepard is the safest space vehicle ever designed or built,” Blue Origin added.

After the publication of the essay, another former Blue Origin employee, Joseph Gruber, said he agreed with its claims about the work environment at the company. “Blue has a horrible culture and yes, there is sexism in the organization as I reported to HR on my exit interview,” he tweeted.

However, he didn’t share the safety concerns expressed in the essay. “It’s not going to be 100% safe, and there is inherent risk, but I truly feel that it is a safe vehicle,” he wrote, noting he worked on its avionics. “I would fly on [New Shepard] today.”

Evolution and Adaptation of Wheat Powdery Mildew: Why Researchers are Studying It
Oil companies are giving back tons of cash — and other things we’ve learned this earnings season
SONDORS prepping its low-cost electric motorcycle for delivery [Update: Deliveries started]
Report: U.S. should push for global rules on space traffic management
Episode 326: The heat index; a historic climate policy opp