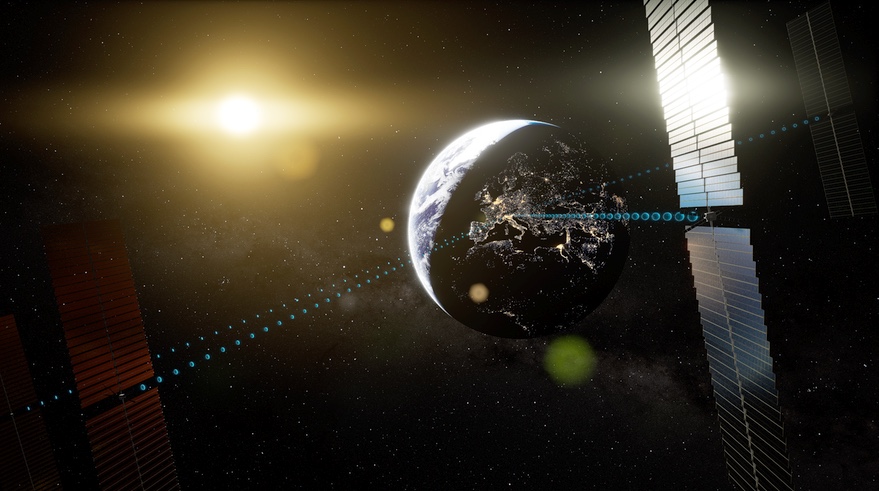 WASHINGTON — The European Space Agency will seek funding this fall for a feasibility study of space-based solar power, the latest sign of support for a concept that still faces significant technical and financial challenges.

Josef Aschbacher, ESA director general, tweeted Aug. 16 that he will ask member states at this November’s ministerial meeting to fund a preparatory program for space-based solar power (SBSP) called Solaris. He did not disclose how much funding he was requesting for Solaris.

“We have the main building blocks already, but let me be clear: for the project to succeed, much technology development and funding is still needed,” he wrote.

Solaris, according to ESA, would be a three-year study to address technical issues associated with SBSP, a concept where solar energy is converted into electricity and then beamed to Earth for terrestrial use. The study would examine potential commercial opportunities for developing SBSP and address policy issues.

“It would ensure that Europe becomes a key player — and potentially leader — in the international race towards scalable clean energy solutions for mitigating climate change,” ESA states on a web page about Solaris. The three-year study would support a decision at the next ministerial meeting in 2025 on proceeding with a full-fledged SBSP development effort.

ESA is requesting funding for Solaris after two independent cost-benefit studies by consulting firms Frazer-Nash in the United Kingdom and Roland Berger in Germany. Both concluded SBSP has the potential to meet European energy needs while supporting the goal of “net zero” emissions by 2050 set by the European Commission

The Frazer-Nash study estimated that the net present value of a European SBSP system from 2022 to 2070 would range between 149 billion and 262 billion euros ($150–264 billion). A central case of 54 “gigawatt-class” SBSP satellites would produce 601 billion euros in benefits in that period, primarily from avoided costs of producing energy terrestrially along with its carbon dioxide emissions, with 418 billion euros in costs to develop and operate the SBSP system.

The ESA initiative comes amid a resurgence of interest globally in SBSP, which first had its heyday a half-century and has periodically resurfaced since then. The U.K. government has shown an interest in SBSP, including it among other alternative energy technologies it was considering last year.

The China Academy of Space Technology announced in June it would test wireless power transmission, an essential technology for SBSP, in low Earth orbit in 2028 followed by a megawatt-class experimental satellite in geostationary orbit as soon as 2030. Those tests are part of a long-term effort that could lead to satellites producing two gigawatts of power in GEO in 2050.

NASA’s Office of Technology, Policy and Strategy announced at the International Space Development Conference (ISDC) in May that it was undertaking a short-term study of SBSP, updating existing concepts to reflect advances in technology and reductions in launch costs. The agency expects to have the study completed in time to present at the International Astronautical Congress in Paris in September.

Advocates of SBSP said the potential for major reductions in launch costs enabled by systems like SpaceX’s Starship, along with growing demand for clean energy sources to meet net-zero goals, is driving the renewed interest in SBSP by governments. However, even those advocates acknowledge SBSP faces major hurdles, from the economics of such systems to development of key technologies needed to assemble and operate massive satellites, as well as policy implications associated with beaming power from space.