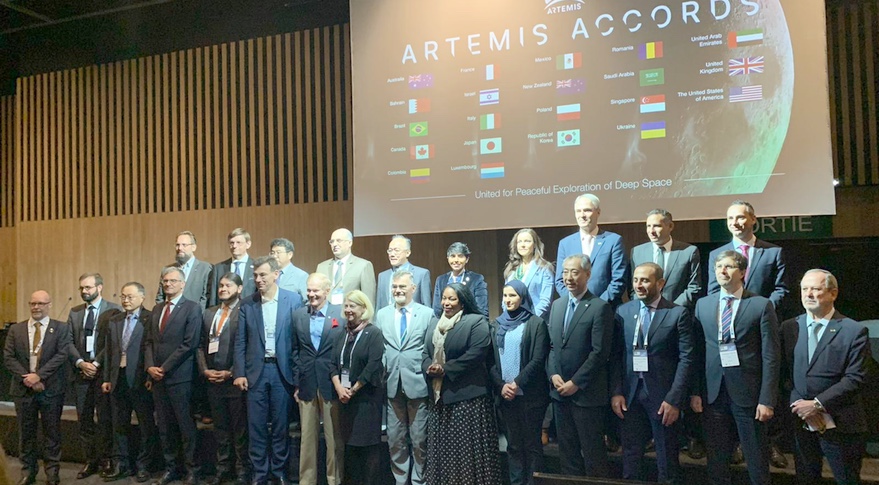 PARIS — Nations that have signed the U.S.-led Artemis Accords met in person for the first time Sept. 19 as an initial step to elaborate on the principles for safe and sustainable space exploration.

Representatives from the 21 countries that have signed the Accords met on the sidelines of the International Astronautical Congress here. The meeting was primarily an organizational one, with no major announcements or other findings emerging from it.

“We spent most of the time raising and floating ideas,” said Pam Melroy, NASA deputy administrator, at a press conference after the meeting. That included a desire to set up working groups to address technical and other issues. “We had some very interesting discussions about concrete steps to go forward.”

That was the U.S. government’s expectation going into the meeting. “It was simply to convene and have the first discussion to get a better sense of what we could do,” said Jennifer Littlejohn, principal deputy assistant secretary for Oceans and International Environmental and Scientific Affairs at the State Department, in an interview. “It’s just the start of the conversation.”

Other attendees echoed those sentiments. “We believe we have a chance to translate those principles into practical rules,” said Carlos Moura, president of the Brazilian space agency AEB. “We have a long way to go.”

“We found the meeting extremely useful,” said Giorgio Saccoccia, president of the Italian space agency ASI. “There was consensus on the importance of having frequent gatherings of all the signatories.”

As the current Artemis Accords signatories meet, the U.S. is continuing to look for additional countries to join. That group has grown from the initial set of eight countries announced in October 2020 to 21 currently, with Saudi Arabia the most recent signatory in July.

“What we’ve been doing is trying to have conversations on the margins of this event, for example, with countries who are curious, who have asked questions,” said Littlejohn, such as what the benefits are for countries to join the Accords. “We’re just trying to start out with getting to know folks and getting a better sense of what their interests are and what their concerns are.”

She billed the Accords as an opportunity for countries to help set “rules of the road” for space exploration. “The message is sign up, take your seat at the table and be a part of shaping that and thinking through that.”

Those principles, and the Accords themselves, are nonbinding, but some participants expressed an interest to eventually move them into a binding agreement of some kind. “France believes that multilateral discussion and multilateral coordination is a cornerstone,” said Philippe Baptiste, president of the French space agency CNES. At some point, “the principles discussed or the ideas discussed within the Artemis Accords should be the basis for later discussions in the U.N. framework.”

“This will most likely take time,” he added, “but we believe this is very important.”

Uber investigates ‘cybersecurity incident’ after reports of a hack on the company
New Images From Webb Space Telescope May Reveal Secrets of the Birth of Stars
The U.S. looks to rival Europe and Asia with massive floating offshore wind plan
WHY IS THERE A MOON? …. and more!
Shanghai rocket maker considering developing huge methane-fueled rockets