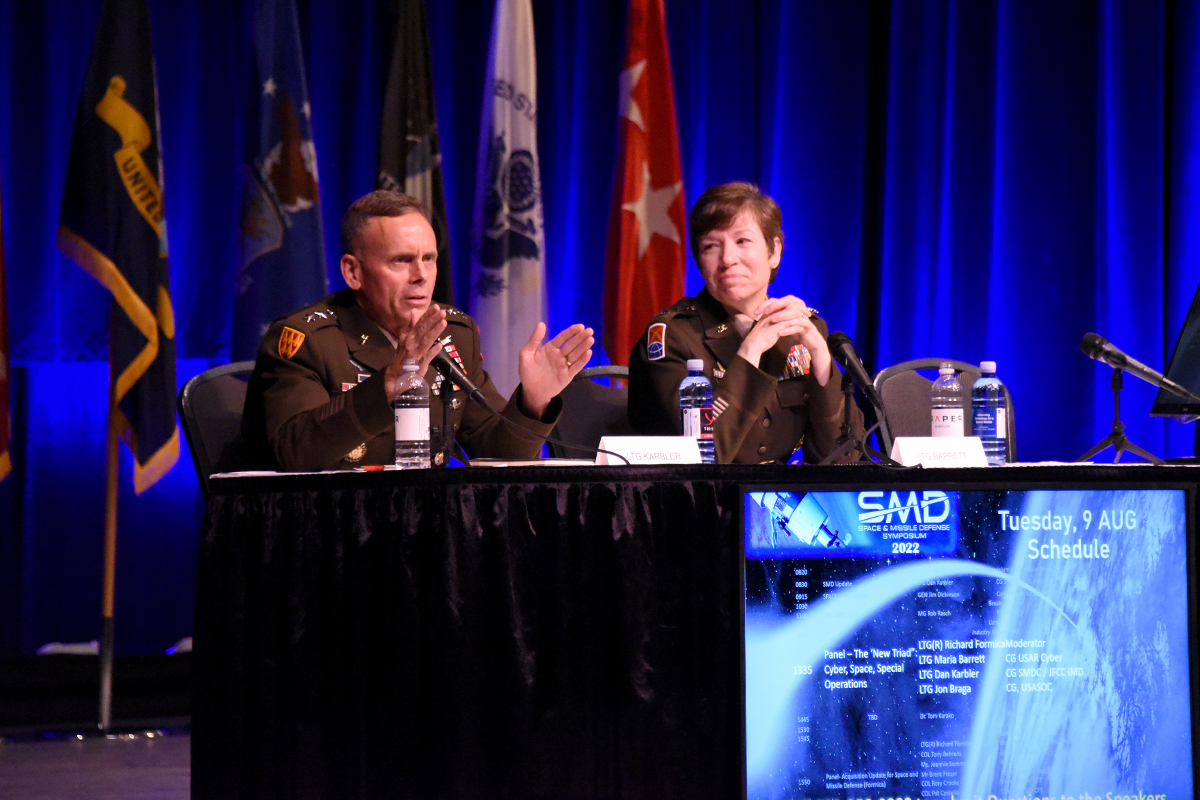 HUNTSVILLE, Ala. — The U.S. Army’s land forces for decades have relied on satellites for communications, navigation and early warning of missile attack. But the Army now wants to figure out other ways to use space technologies for nontraditional military operations such as cyber and information warfare.

Army leaders in panel discussions at the Space and Missile Defense Symposium said wars in the future will be fought in the space and cyber domains. And they argued that there should be more synergy among space, cyber and information warfare capabilities so they can be layered to greater effect.

The head of the Army Space and Missile Defense Command Lt. Gen. Daniel Karbler described the concept as a “triad of space, cyber and special operations.” This would require developing concepts of operations where surveillance satellites and cyber tools, for example, would be used in support of U.S. special forces that specialize in counterterrorism, information warfare and influence operations.

The idea was endorsed by the Army’s top cyberwarfare officer Lt. Gen, Maria Barrett, and the head of Army Special Operations Command Lt. Gen. Jon Braga, who made a joint appearance at the conference.

Using space and cyber technologies deliberately to locate targets, disrupt adversaries’ operations and gain information advantage is a departure from the Army’s traditional role of just being a passive consumer of GPS and satcom services.

Officials said the concept aligns with the Pentagon’s national defense strategy that calls for the military to develop non-lethal capabilities, including those that can disable enemies’ networks and satellites.

Karbler said these unconventional approaches “underscore the vital importance of space and the essential role it plays when used in combination with new and existing capabilities.” Going forward, he added, “no longer can the space domain be untethered from land components.”

Braga argued that greater use of space technologies in warfare is necessary as “adversaries have made great investments in space capabilities and have shown that they will use them.”

Special operations forces increasingly are aware of the importance of space as a high ground, Braga said, as “there is no sanctuary” anywhere on Earth.

Braga suggested the Army and other military services should collectively develop experiments that use space and cyber tools and eventually “test solutions in service exercises and joint force exercises.” He said Army Special Operations Command in March hosted an exercise focused on the intersection of space, cyber and special operations, but more is needed.

Brown said in an interview that the “triad” concept floated by Karbler appears to be an effort to use space and cyber technologies in more sophisticated ways.

“The Army is, and has been, one of the largest consumers of space technologies of any of the services, just based on its sheer size,” said Brown. That is not likely to change but now “they are starting to think about the effects that you would want to have in an unconventional way,” he said. This stands in contrast to the conventional ways of measuring combat power based on the numbers of battalions, tanks and aircraft

Brown said tactics enabled by space and cyber systems give the military options to fight in scenarios the Pentagon calls “anti-access area denial” where enemies deploy air defenses, missiles at sea and other systems to counter U.S. conventional military power.

Bringing in special operations forces into the mix makes sense, he said. “We use our special operators to get into places that are difficult for other people to get into.” These are the units that identify and locate targets on the battlefield to enable the conventional forces to have an impact, Brown added.

Space-based target location and reconnaissance is one way to support missions in denied areas. The Air Force and Space Force have made the case that surveillance traditionally performed by aircraft should move to the space domain, said Brown, “because we don’t expect that we’ll be able to get air assets in place.”

Electronic warfare is another area that could leverage space systems, he added. When one looks at what could be done with electronic signals from space, “it really starts getting creative in how you use assets in a different way.”