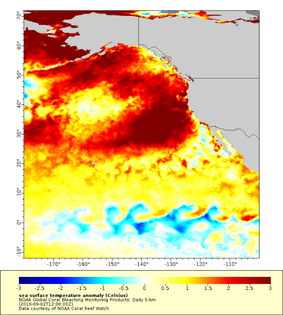 Sea surface temperature anomaly maps show the current extent of the Northeast Pacific Marine Heatwave of 2019 off the US West Coast and Gulf of Alaska. Ocean temperatures above normal in orange and red.

An area of unusually warm water called a marine heatwave has spread all the way from Alaska to California. Marine heatwaves occur when ocean temperatures are much warmer than usual for an extended period of time. Last Thursday, the water in La Jolla, California reached 78.5 degrees. According to scientists at Scripps Institution of Oceanography, this was the highest water temperature ever recorded during the month of September since ocean temperature monitoring began in 1916. The warmest water temperature of all time was last August, when the water reached 79.5 degrees.

The current heatwave is reminiscent of the 2014–16 marine heatwave known as “the Blob.” During that event, warmer ocean conditions created a harmful algal bloom, left lesser-quality food for young salmon, and stranded thousands of hungry young California sea lions on beaches.