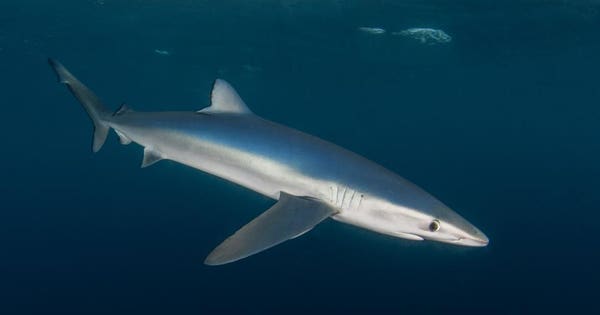 Do you know what ingredients are in the pet food you are feeding your animals? What about what is in your favorite beauty care products? Chances are one of the ingredients could be a threatened shark species.

Does your pet food or cosmetic products have blue shark (Prionace glauca) in it? A new study shows that it might!

PhD candidate and Research Assistant at Stony Brook University Diego Cardeñosa tested 87 pet food products and 24 cosmetic products and used a multiplex mini-barcode PCR protocol to identify traces of shark DNA in these beauty care and pet food products in order to identify them to the genus and/or species level. Cardeñosa ended up successfully amplifying 63% of the pet food products and 12.5% of the cosmetic products. For the pet food products, 70% of those were identified as endangered shortfin mako shark (Isurus oxyrinchus). For the beauty products, he found them containing blue shark (Prionace glauca), scalloped hammerhead (Sphyrna lewini) and blacktip shark (Carcharhinus limbatus). And if that wasn’t shocking enough, maybe this is: none of the products tested was labeled containing shark-based ingredients.

The International Union for the Conservation of Nature’s (IUCN) latest assessment for these sharks vary from Near Threatened to Endangered. Mako sharks recently made international news due to the Convention on the International Trade in Endangered Species of Wild Fauna and Flora (CITES). The attendees to the CITES gathering voted on and agreed to place the two species of mako sharks and other sharks on Appendix II of CITES, meaning that international trade in these species will be regulated, and countries will be incentivized to manage the fisheries for these species to ensure they are sustainable.

While many people know of the demand of shark fins and meat, less known to the general public is that there is a contemporary global demand for shark liver oil and the status of this trade is still largely unknown. Shark liver oil is highly valuable in the cosmetic industry since one of the main components of shark liver oil is a compound called squalene, which is named after squalidae, the shark family from which it was first isolated and originally sourced from for many years. However, squalene can be obtained from plants (e.g. amaranth and olives) or animals (e.g. shark livers). While humans use squalene as an ingredient for beauty products ranging from moisturizers to sunscreen to lipsticks, sharks use the oil in their livers to help regulate their buoyancy. Deep-sea sharks tend to have more oil in their livers, and as such are targeted due to having such high concentrations of squalene. The problem with this is that like many shark species, deep-sea sharks are slow-growing and mature sexually later in life, which makes them especially vulnerable to exploitation from overfishing, as squalene fisheries are pretty unregulated, according to a 2011 Food and Agriculture Organization report.

However, if you are eagle-eyed and look through the ingredients of your beauty products you may have seen a shift to “squalane” instead of “squalene” listed. Does one letter really change where it comes from? Squalane is a hydrogenated version of squalene, and this hydrogenation process makes squalane more stable than squalene. While most major companies have shifted away from using shark-derived squalane, many don’t specify where they have gotten it from. Cardeñosa also noticed how many pet food products contain meat from vague categories such as “ocean fish” or “white fish.”

As one can imagine, there is outrage from both the public and those who study sharks. Cardeñosa said it best in his paper: “This study highlights the need for more labeling controls since shark populations could benefit if consumers have the alternative to choose whether or not to purchase products containing threatened shark species in order to decrease the global demand.”