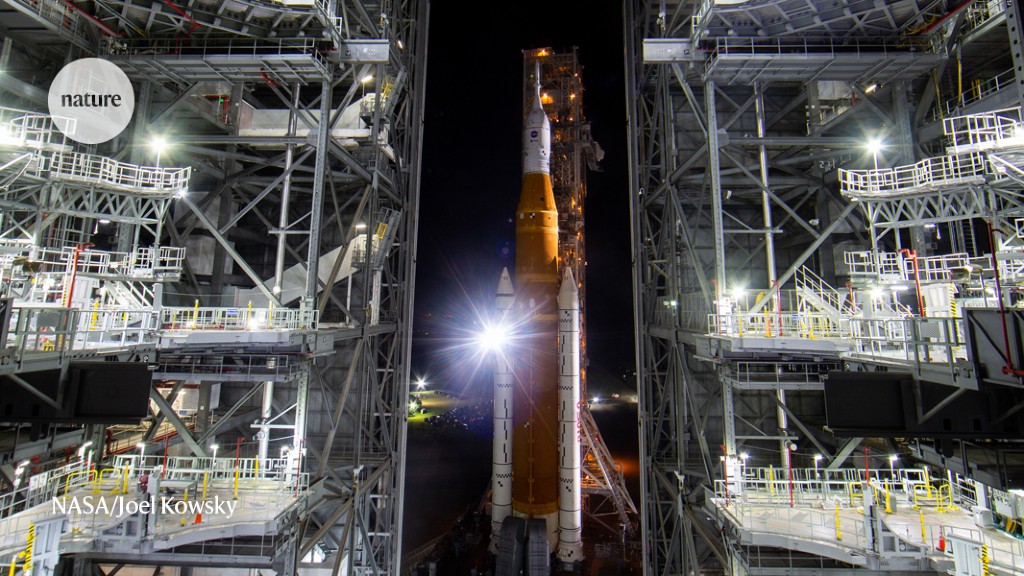 By now, it should have sent an uncrewed astronaut capsule winging around the Moon. But instead, NASA’s big new rocket remains on the launch pad after two cancelled attempts to send it into space. Leaks in the fuel lines that feed liquid hydrogen to the rocket, called the Space Launch System (SLS), contributed to keeping it from launching on 29 August and 3 September, and technicians are now trying to fix the problem.

The delay is reminiscent of similar struggles with hydrogen leaks when NASA flew its space shuttles between 1981 and 2011. The agency hopes to overcome the challenge and soon send the SLS and its accompanying capsule on a test flight, known as Artemis I — a major milestone in a programme that aims eventually to return astronauts to the Moon.

Will the overall programme now be delayed? Here, Nature answers your questions about what’s next for Artemis I.

Why hasn’t the rocket launched yet?

On NASA’s first try, on 29 August, lightning near the launch pad delayed work to fill the rocket’s fuel tanks. Then two hydrogen leaks appeared. Finally, a sensor indicated that one of the SLS’s four main engines was not chilled to the temperature necessary to receive fuel before lift-off. NASA halted the launch attempt — although it later found that the sensor was probably faulty and the engine was as cold as it needed to be.

On the second try, on 3 September, a large hydrogen leak appeared in one of the previous leaky locations, a ‘quick disconnect’ seal on a fuel line. This leak was much larger than the previous one, to the point that the gas, which is flammable, built up to dangerous levels. “Hydrogen is difficult to work with,” said Jim Free, NASA’s associate administrator for exploration-systems development, at a news briefing after the launch was scrubbed. “I’m not saying that’s an excuse, it’s just a fact.”

Why is NASA still using hydrogen if it leaks so much?

As a rocket propellant, liquid hydrogen is lightweight and powerful. When combined with liquid oxygen, it produces the highest specific impulse — a measure of the thrust it can generate — of any rocket fuel. So NASA has continued using it even though it can be extremely finicky and prone to leaks. “Hydrogen is a challenging molecule, but it’s worth it,” said John Blevins, the SLS chief engineer with NASA, at an 8 September media briefing. “If you look at the mission we’re doing, this mission begs to use this fuel.” The US Congress also essentially ordered NASA to use hydrogen for the SLS when it authorized the rocket’s development in 2010, so the agency could keep infrastructure and jobs that were developed during the space shuttle era.

Aerospace companies have experimented with other propellants. SpaceX of Hawthorne, California, uses methane for the engines that will power its planned deep-space rocket, Starship. Methane burns more cleanly and is cheaper than the fuels SpaceX has used previously, such as kerosene. But it does not provide as much specific impulse as hydrogen.

When will NASA try to launch again?

For the moment, engineers are working to fix the hydrogen leaks while the SLS is still on the launch pad at the Kennedy Space Center in Florida. But there are many constantly changing factors that dictate when and how NASA might next try to launch.

For instance, the rocket contains a safety system that is designed to destroy it if it veers off course. The system’s batteries have to be refreshed regularly, according to rules set by the US Space Force, a branch of the US military that is in charge of safety at the launch pad. NASA has already been granted one extension on the batteries’ lifetime, and if it doesn’t get another, it will have to roll the SLS inside a building at the space centre to reset the batteries. This is a lengthy process that will add weeks to the schedule.

Adding to the logistical complexity, NASA can launch the rocket only on certain dates. These are constrained by the physics of how to get a spacecraft off the rotating Earth, around the Moon and back, while satisfying requirements such as making sure the capsule splashes down into the Pacific Ocean during daylight, at the end of its journey. And NASA doesn’t want to launch the SLS in the days around 3 October, when a commercial spacecraft is slated to take four astronauts to the International Space Station.

All this boils down to the next launch attempt probably not coming before mid-October. NASA has, however, reserved the launch pad on 23 September and 27 September in case it is able to resolve the hydrogen leak and battery resetting by then.

The experiments — including ten small satellites, plus modules meant to test biological and radiation hazards in deep space — are in limbo as NASA assesses a new flight schedule. Five of the satellites have not had their batteries charged since being installed on the rocket, in some cases more than a year ago. NASA would have to disassemble parts of the rocket to access them. Extended launch delays could drain the batteries to the point that some of the satellites might not be able to complete their missions. But the main goal of Artemis I is to test the SLS rocket and the capsule that will one day take astronauts to the Moon. Science is secondary to that broader aim.

Will the failed attempts delay the plan to send astronauts back to the Moon?

Not significantly, unless the rocket remains grounded for many months. Launch dates for spaceflight slip regularly, although the Artemis I delays are particularly grating because the SLS has been in development for more than a decade and has run significantly behind schedule and over budget. After the recent launch cancellations, NASA administrator Bill Nelson said that the agency continues to plan for the Artemis II flight — which would carry astronauts around the Moon and back — in 2024, followed the next year by Artemis III, which would land humans at the Moon’s south pole in the first crewed lunar landing since 1972. These dates probably won’t hold, but they are what the agency is publicly working towards.

NASA is invested in these flights, having its eyes on the long-term goal of returning humans to the Moon and eventually sending them on to Mars, Pam Melroy, the agency’s deputy administrator and a former space shuttle commander, told Nature in May. “We’re trying to create a blueprint for exploration and science and a sustained human presence throughout the Solar System,” she said.