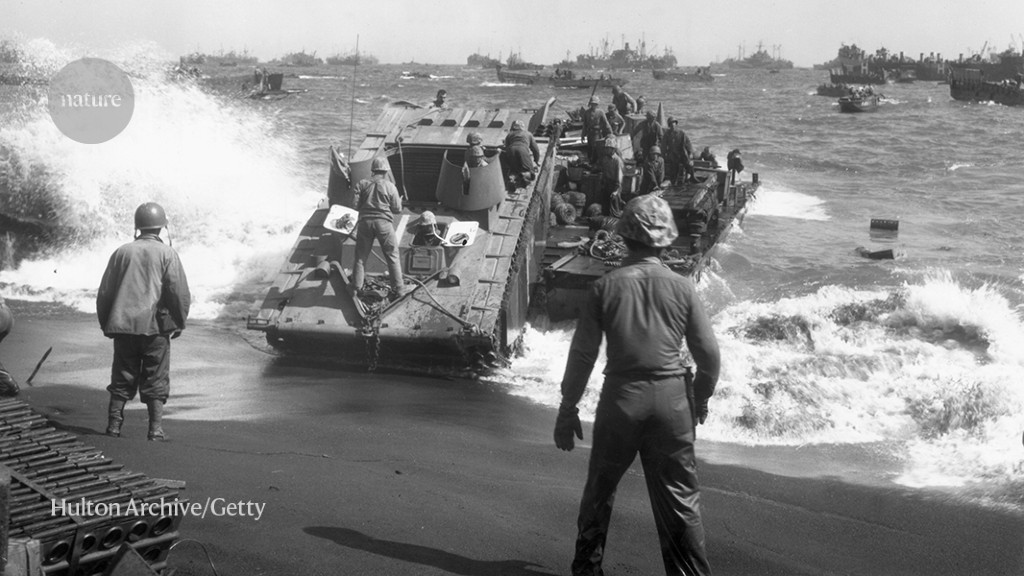 The Battle of Tarawa was a disaster from the start. In November 1943, during their first big foray in the central Pacific Ocean, US forces invaded this atoll in the Gilbert Islands, hoping to dislodge Japanese troops and push closer to Tokyo. But as soon as the assault began, it literally ran aground. Most of the landing boats smashed into a shallow coral reef, forcing marines to flounder their way to shore amid Japanese gunfire. One in five US troops died in the battle — 300 on the reef alone.

Death tolls among the Japanese defenders and Korean labourers were much higher. But the US losses sparked outrage in Congress and among the American public. The outcome at Tarawa led the US military to drastically increase its oceanographic intelligence services. Military leaders did not want to repeat the fatal miscalculation made in the run-up to the invasion of Tarawa, when planners had failed to fully account for the narrow tidal range of a neap tide, which caused the boats to run aground.

In Lethal Tides, Catherine Musemeche highlights the little-known career of Mary Sears, the chief US naval oceanographer during the Second World War. Sears ran the office that compiled research about tides and currents, the shapes of the ocean floors and other oceanographic data that were crucial to war operations. Musemeche’s sympathetic depiction portrays Sears as an experienced marine scientist who persevered through the sexism that stopped her from going to sea as an academic, leading her to become a highly influential operative in the military.

Sears had many advantages growing up. Born to a well-off family in Massachusetts in 1905, she was educated at an exclusive girls’ school in Boston and attended Radcliffe College in Cambridge, Massachusetts. But she could not escape the assumptions that Radcliffe students were not as talented as the men studying at nearby Harvard University, or that a woman with a family could not have a career. At Radcliffe, she began working on zoological specimens, mostly plankton, and, as a graduate student, spent summers doing research in the coastal village of Woods Hole, Massachusetts, when her mentor, the marine biologist Henry Bryant Bigelow, worked at the Marine Biological Laboratory there.

Her studies put Sears front and centre when the Woods Hole Oceanographic Institution (WHOI) was founded in 1930, with Bigelow as its first director. Sears was one of the institution’s first staff members, working to organize collections of plankton, jellyfish and other marine creatures. She was, of course, confined to the laboratory, because Bigelow did not allow women to conduct research on board WHOI’s brand-new research vessel.

But her position at WHOI equipped her with skills that would prove useful during the war. While working with Bigelow, she met visiting oceanographers from other nations and forged connections she maintained throughout her entire career. She learnt to quickly pull together reports of discoveries and determine the finds’ importance. And she knew that the United States lagged behind in the burgeoning field of oceanography.

She joined the Navy in 1943 through a casual act of sexism. When oceanographer Roger Revelle needed someone to replace him in an administrative position at the Navy’s Hydrographic Office, he asked around for someone who was not considered crucial to wartime research. Sears was identified as the only non-essential person at WHOI, and so she moved to Washington DC.

The team she led was small, and consisted mostly of members of the women’s branch of the Naval Reserve. They produced reports on the oceanographic settings of Pacific islands that the Navy was thinking about invading. The intelligence included not only basic information, such as tidal ranges and underwater topography, but also assessments of how ocean currents, the time of day, the weather and other factors might contribute to the success or failure of military tactics. Even microscopic sea life could give away the presence of a night-time operation if the water contained organisms that glowed when a submarine passed through them.

Sears shifted from the snail-like speed of academic publishing to the fast-paced needs of the military. Navy officials came to her just a few months before planned operations, asking for a detailed assessment of potential landing targets to be done immediately. She would often get knocks on her door in the middle of the night and would go to the office to put together tidal tables for yet another small Pacific island.

She had help. Lethal Tides is something of a paean to scientific librarians, such as Mary Grier, who worked for Sears by gathering reference material. There was no googling of publicly available information back then — Grier had to meticulously scour obscure sources of information to track down the data she needed. This was more than oceanographic research: it was military intelligence. And, ironically, some of it was sourced from Japan itself. Emperor Hirohito, who took the throne in 1926, was an amateur marine biologist who stimulated oceanographic research in Japan in the 1920s and 1930s. A Japanese naval survey of the western North Pacific Ocean became a key source for Grier when assessing the coasts of the many small islands the US Navy was interested in.

Musemeche, a paediatric surgeon and author, keeps the focus on Sears and her team, and does not analyse wider trends in oceanography during and after the Second World War. But that narrow focus serves the book well. The narrative speeds up as the US military advances in the Pacific region, ultimately setting up the battle for Iwo Jima in February 1945 and the invasion of Okinawa weeks later.

After leaving active duty in 1946, Sears settled at WHOI for the rest of her career. She founded two major oceanographic journals and became the first woman to have a Navy research vessel named after her, albeit posthumously. But before all of that, she made a trip to Europe in 1946 — where Norwegian colleagues let her sail aboard one of their research vessels, no questions asked.

The author declares no competing interests.