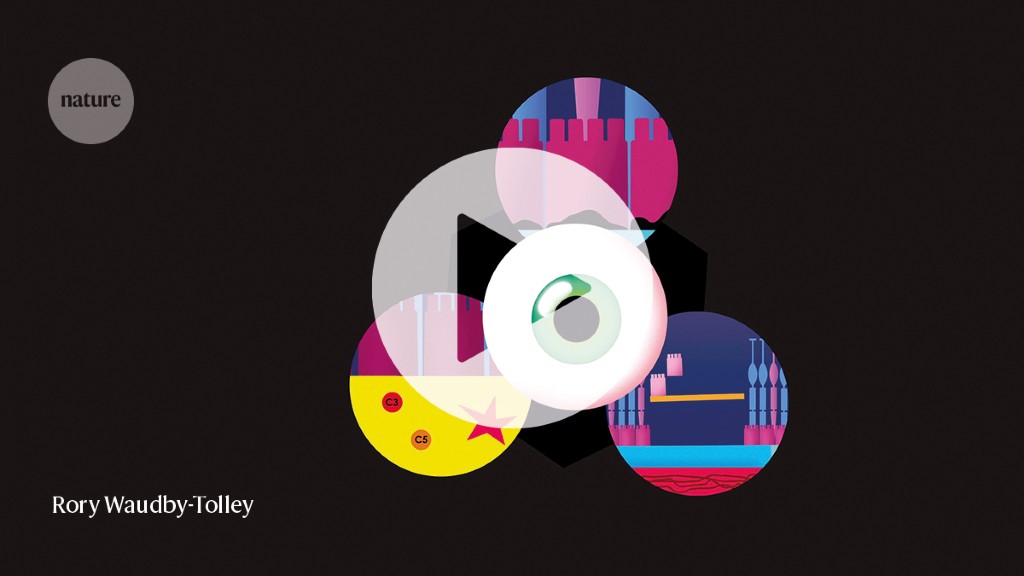 The eye disorder known as age-related macular degeneration (AMD) is the leading cause of blindness in older adults. The condition involves damage to the retina — the light-sensing tissue at the back of the eye — and a person’s risk of developing it climbs sharply after middle age. By one estimate, almost 1 in 12 adults between the ages of 45 and 85 worldwide experience some degree of visual impairment due to AMD (W. L. Wong et al. Lancet Glob. Health 2, e106–e116; 2014). 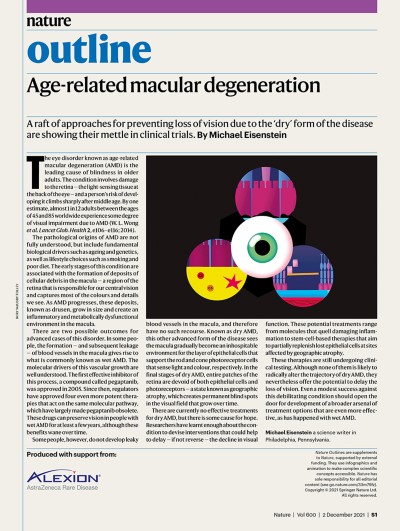 The pathological origins of AMD are not fully understood, but include fundamental biological drivers such as ageing and genetics, as well as lifestyle choices such as smoking and poor diet. The early stages of this condition are associated with the formation of deposits of cellular debris in the macula — a region of the retina that is responsible for our central vision and captures most of the colours and details we see. As AMD progresses, these deposits, known as drusen, grow in size and create an inflammatory and metabolically dysfunctional environment in the macula.

There are two possible outcomes for advanced cases of this disorder. In some people, the formation — and subsequent leakage — of blood vessels in the macula gives rise to what is commonly known as wet AMD. The molecular drivers of this vascular growth are well understood. The first effective inhibitor of this process, a compound called pegaptanib, was approved in 2005. Since then, regulators have approved four even more potent therapies that act on the same molecular pathway, which have largely made pegaptanib obsolete. These drugs can preserve vision in people with wet AMD for at least a few years, although these benefits wane over time.

Some people, however, do not develop leaky blood vessels in the macula, and therefore have no such recourse. Known as dry AMD, this other advanced form of the disease sees the macula gradually become an inhospitable environment for the layer of epithelial cells that support the rod and cone photoreceptor cells that sense light and colour, respectively. In the final stages of dry AMD, entire patches of the retina are devoid of both epithelial cells and photoreceptors — a state known as geographic atrophy, which creates permanent blind spots in the visual field that grow over time.

There are currently no effective treatments for dry AMD, but there is some cause for hope. Researchers have learnt enough about the condition to devise interventions that could help to delay — if not reverse — the decline in visual function. These potential treatments range from molecules that quell damaging inflammation to stem-cell-based therapies that aim to partially replenish lost epithelial cells at sites affected by geographic atrophy.

These therapies are still undergoing clinical testing. Although none of them is likely to radically alter the trajectory of dry AMD, they nevertheless offer the potential to delay the loss of vision. Even a modest success against this debilitating condition should open the door for development of a broader arsenal of treatment options that are even more effective, as has happened with wet AMD.

This article is part of Nature Outline: Age-related macular degeneration, an editorially independent supplement produced with the financial support of third parties. About this content.

Medicine Nobel goes to scientists who discovered biology of senses

World commits to a pandemic response pact: what’s next