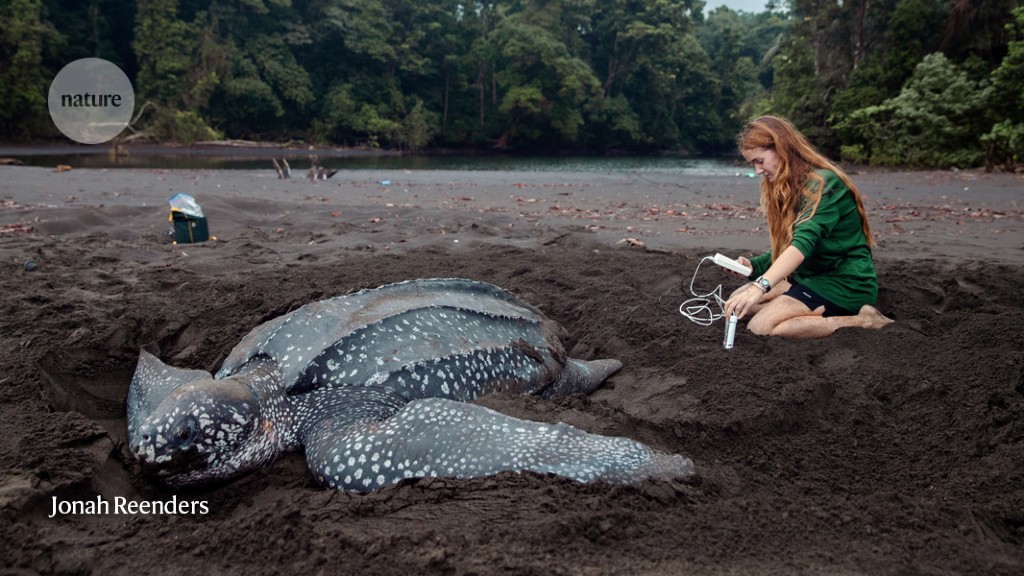 This picture of marine conservation biologist Callie Veelenturf won the Nature Careers photo competition in 2018 — an event Veelenturf credits with kick-starting her career. She went on to assist in drafting a law that will help to protect species and habitats in Panama.

Since 2021, editors at Nature have been tracking instances such as this, in which our journalism and opinion articles have had an impact. Here, we look at three times when content on biodiversity affected researchers, communities or policies. As well as shaping Veelenturf’s conservation work, Nature articles have raised the profile of a proposal to protect part of the Antarctic Ocean and fuelled discussions of carbon-tax proposals to fund tropical-forest conservation.

In the prize-winning photo, Veelenturf was pictured with a leatherback sea turtle (Dermochelys coriacea) in Equatorial Guinea, where she was collecting data for her master’s degree at Purdue University Fort Wayne, Indiana, in 2016. She and biologist Jonah Reenders, now a photographer based in San Francisco, California, spent nearly half a year there, living in tents on Bioko Island, and Reenders took the picture of her as she measured the pH, conductivity and temperature of the sand near the leatherback’s nest.

After the photo was published, a deluge of e-mails and messages “gave me this network, almost overnight, of other sea-turtle conservationists doing similar things around the world”, says Veelenturf, who is now based in Arraiján, Panama. “All of a sudden I was an ‘us’.”

While doing fieldwork, Veelenturf read David Boyd’s book The Rights of Nature (2017), which described how some lawyers had fought to earn legal rights for nature. Such laws, which now exist in at least nine countries, make it easier to conserve the environment, because organizations can sue to protect a rainforest or stream. She went on to work with environmentally minded congress member Juan Diego Vásquez Gutiérrez and Panamanian legal advisers to draft a similar law for Panama, which is especially rich in biodiversity. Vásquez sponsored the legislation, and after more than a year of debate and revision by the public and in the national assembly, it was signed into law on 24 February 2022.

In October 2020, a Comment article argued that the seas around the western Antarctic Peninsula should be designated a marine protected area. Overfishing there is removing large numbers of shrimp-like crustaceans called Antarctic krill (Euphausia superba), affecting the region’s entire web of species, including penguins, whales and seals, which feed on krill. The peninsula is also one of the fastest-warming ecosystems on the planet.

A proposal for a marine protected area in the Antarctic must be approved by the groups of governments that make up the Commission for the Conservation of Antarctic Marine Living Resources (CCAMLR). Cassandra Brooks, a marine scientist at University of Colorado Boulder who co-authored the Nature piece and sits on CCAMLR’s non-voting science delegation, says that the Comment was sent to all the commission’s government delegations and observer groups. “If we can raise the issue in the public,” Brooks says, “it does help raise the issue within that diplomatic space.”

The western Antarctic Peninsula proposal is one of three on the table for the next CCAMLR meeting in October 2022. It took ten years for CCAMLR to declare the Ross Sea a marine protected area. “The Antarctic does not have ten years,” says Comment co-author Carolyn Hogg, a conservation biologist at the University of Sydney in Australia.

News stories about the article were published globally, including in China, India, South Korea and Malaysia. Hogg says it increased her visibility and further raised her profile with the Australian government. She is working with the government to ensure that the country’s threatened-species policy is informed by the latest genomic research. The goal is to give endangered populations the best chance of survival by preserving as much genetic diversity as possible.

Hogg and Brooks wrote the piece with other women, some of whom were part of Homeward Bound, a global leadership programme for women in science, technology, engineering, mathematics and medicine. Many Homeward Bound participants and alumnae — 288 women from at least 30 countries — co-signed it and worked to translate it into many languages, “showing CCAMLR that this large community of women scientists from all over the world is watching, and going to hold them accountable”, Brooks says.

Antarctica tends to be “both diplomatically and scientifically dominated by men”, she notes, and the impact of this global community of women was inspiring.

Tropical countries should adopt a carbon tax, urged another Comment in February 2020, creating a levy on fossil fuels that should be used to conserve tropical forests. Costa Rica and Colombia had already adopted such a tax, and several other countries, including Indonesia, Brazil and Peru, are now considering implementing one, says Sebastian Troëng, executive vice-president of conservation partnerships at Conservation International who is based in Brussels and co-authored the piece.

After the article was published, the authors made sure it was widely discussed. One of them, environmental economist Edward Barbier at Colorado State University in Fort Collins, presented the proposal at major meetings. These included the World Bank–International Monetary Fund forum in April 2022 and the Global Peatlands Initiative of the United Nations Framework Convention on Climate Change, at the 2021 climate summit COP26, in Glasgow, UK. The carbon-pricing proposal can be applied to any ecosystem, Barbier says. “Peatlands are ideal, because you’re saving probably the most carbon-dense ecosystem on our planet.”

Meanwhile, Troëng’s colleagues presented the proposal to representatives from the finance and environment ministries of Chile, Mexico, Peru, Ecuador, Colombia and Costa Rica. “Since then, we’ve been working directly with government ministries,” he says, to strengthen the existing carbon-tax system in Colombia and to establish similar systems in Peru and Singapore. “I think what people appreciate the most is the fact that two countries have already done it, so it’s not just a theory or a wild idea, but it’s actually working,” Barbier says.

“It’s always challenging to say, was it this paper that made something happen?” notes Troëng, on the impact of the article. “But it’s part of this growing consensus that nature plays an extremely important role in how we address climate change.”