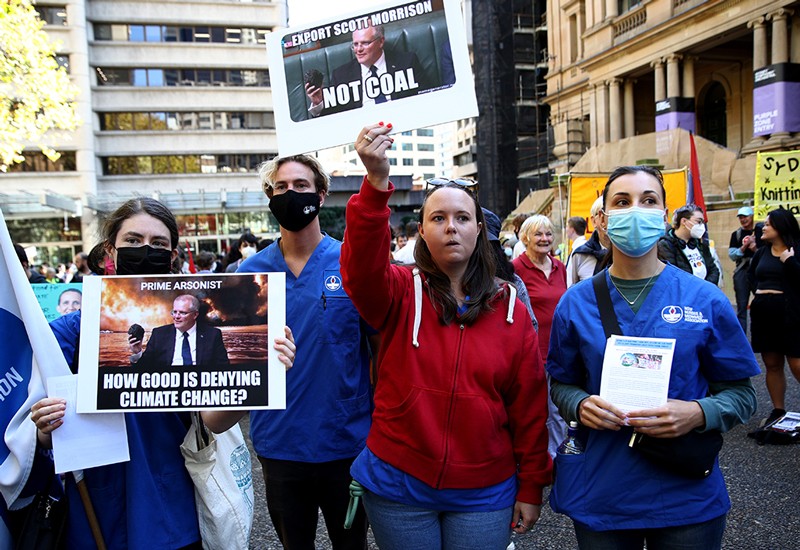 Scientists in Australia are despondent ahead of the country’s election next week. They say neither the government nor the main opposition party have made sufficient pledges to address issues surrounding research funding, low morale and job insecurity — issues that the COVID-19 pandemic has exacerbated.

“There’s a very dark mood in science in Australia at the moment,” says Darren Saunders, a biomedical scientist at the University of Sydney. “It’s pretty shocking actually. It’s pretty sad. A lot of people have had a really tough time of it.”

Opinion polls suggest that voters could oust the government, led by prime minister Scott Morrison of the conservative Liberal–National coalition, on 21 May. Polls report that the opposition centre-left Labor Party, led by Anthony Albanese, would receive 54% of votes. But some political analysts are reluctant to predict the result after the coalition defied the polls and won the last election.

So far, the campaign has focused on the economy and the cost of living. Researchers say they are disappointed that science and the environment have barely featured, despite the ongoing pandemic and large parts of the country experiencing calamitous bush fires and flooding in recent years. Australians “need a government that can take on board evidence, create policy and respond effectively to a crisis”, says Michael Brown, an astrophysicist at Monash University in Melbourne.

Scientists say a boost in research funding is desperately needed. Government investment in science has declined by 16% since 2009, under both Liberal–National and Labor-led governments, and some warn that the sector is in a dire state. When the government closed Australia’s borders during the pandemic, universities — where about half the nation’s researchers work — lost a major source of funding because international students who pay high fees could not return to study. Universities were dealt another blow in 2021, when the federal government implemented legislation that cut funding for science teaching and research. “The lack of funding has hit the road, and a lot of people have lost their jobs, a lot of people shut their labs,” says Saunders.

In the first year of the pandemic, about 9000 full-time-equivalent university jobs were lost, according to figures from the Australian Academy of Science. That’s equivalent to around one in 14 employees.

“We’ve laid off 10% of our staff,” says Nobel laureate Brian Schmidt, the vice-chancellor of the Australian National University in Canberra. And with the reduction in overall government funding and fees from international students, Schmidt says that the university will not be able to fund as much science in the years ahead. Research-intensive universities have been hit the hardest because science incurs more costs than arts-based courses, he says.

As a result of funding cuts, job losses, growing workloads and worsening morale, the Australian Academy of Science (AAS) warned in March that the country’s science system “could emerge from the pandemic weaker than it began”. The academy is calling on whoever wins the election to conduct a national review of research and to develop a long-term investment strategy.

The $2.2-billion pledge could be a “game-changer” for research commercialization in Australia, says Misha Schubert, chief executive of Science & Technology Australia, a Canberra-based organization that represents around 90,000 scientists and technologists. But a plan for supporting basic research is also needed, she says. “Without those discovery breakthroughs, we have nothing to translate or commercialize,” says Schubert. There is also an urgent need to provide more security and certainty for the workforce, especially early-career scientists, she says.

Financial precarity is leading to a ‘brain drain’ of researchers moving overseas or into other jobs, says Mohammad Taha, co-deputy chair of the AAS’s Early- and Mid-Career Researcher Forum. Finding firm numbers on how many scientists leave the country or profession is difficult, but surveys by Professional Scientists Australia in 2020 and 2021 found that around one in five respondents wanted to leave the scientific workforce permanently.

Many researchers, particularly those early in their career, have limited job security. The survey by Professional Scientists Australia found that almost one in four respondents had a fixed-term contract, and the average duration was only 18 months. The problem is compounded by researchers’ “unsustainable” workloads, and the incredibly challenging process they face to secure research grants, says Taha. “There’s an expectation that if you’re not burning out, it means that you’re not working hard enough,” Taha says, adding that these issues particularly affect minorities.