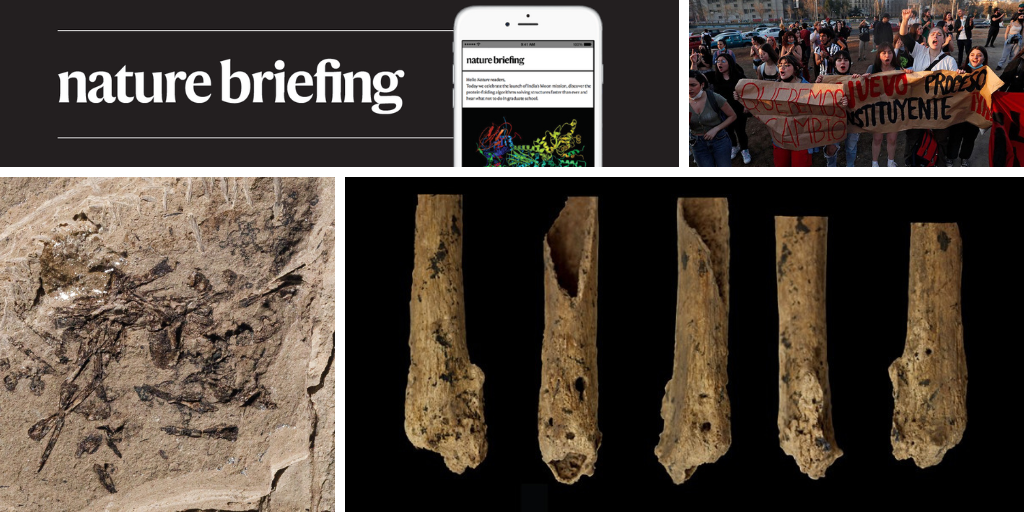 Hello Nature readers, would you like to get this Briefing in your inbox free every day? Sign up here.

The skeleton of a person who lived 31,000 years ago bears hallmarks of the deliberate removal of their lower left leg — the earliest known surgery of its kind. Discovered in a limestone cave in Borneo, the remains pre-date the previous oldest known case of limb amputation by more than 20,000 years. The person appears to have survived for at least six to nine years after the surgery.

On 4 September, Chileans voted to reject a proposed constitution for their nation that framed science as a tool for improving society. It also emphasized actions against climate change and support for research across all of Chile, rather than only at institutions in the capital city. In 2020, the country voted overwhelmingly to replace the constitution enacted in 1980 by dictator Augusto Pinochet. But the ambitious reforms in the draft charter proved too much for most voters, and 62% opposed it. “My gut tells me that fear won,” says astronomer Bárbara Rojas-Ayala.

A heatwave last weekend caused extensive melting across Greenland at a time when the melt season should have been over. Researchers estimate that about 20 billion tonnes of ice was lost across Greenland, amounting to 7% of the total ice lost in the country in a typical year. Greenland already contributes more than the Antarctic ice sheet and mountain glaciers to rising sea levels — which this event will further elevate. “This event demonstrates how global warming does not only increase the intensity but also the length of the melting season,” says polar scientist Maurice van Tiggelen.

Scientists should consider participating in civil disobedience to press for urgent climate action, argue six researchers who study climate activism and policy. “The scientific community is well aware of the grim trajectory on which the Earth is headed,” they write. “We have long since arrived at the point at which civil disobedience by scientists has become justified.” Public acts of conscience are effective, reasonable and ethical, they argue.

Fifty years ago this month, meteorologist John Sawyer published a short but prescient paper in Nature. In it, he summarized what was known about the role of carbon dioxide in the greenhouse effect, and made one of the first predictions of future global warming: that temperatures would rise 0.6 ℃ by the end of the twentieth century. Meteorologist Richard Betts looks back at the historic paper and how its predictions compare to the current reality.

Infographic of the week

WHY IS THERE A MOON? …. and more!
How can energy storage maximize decarbonization? This new consortium has an idea
PLD Space completes static-fire tests of Miura 1
New tri-agency office to coordinate U.S. missile-defense space programs
Biologists Have Discovered How Burmese Python’s Grow and Evolve