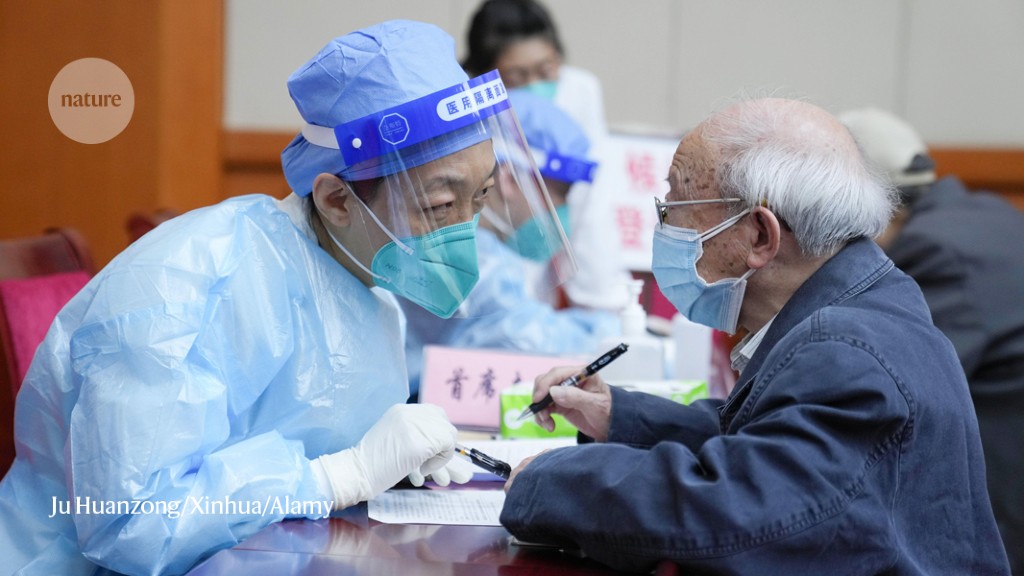 China is getting closer to approving its first mRNA vaccine to protect people against COVID-19. In a small clinical trial, the Chinese vaccine candidate triggered a stronger antibody response in vaccinated adults when given as a booster shot than did a jab containing inactivated SARS-CoV-2, the vaccine platform that the country has mostly relied on so far.

The experimental jab, called ArCoV, is a strong candidate to become China’s first approved mRNA vaccine. But what it would mean for the government’s handling of the pandemic is hard to know, say researchers. A highly effective mRNA vaccine would reduce the chances of widespread serious infections that could overwhelm hospitals. However, it is unlikely to bring an end to the country’s strict ‘zero COVID’ strategy, which uses mass testing and lockdowns to quash all infections.

So far, the Chinese drug regulator has approved seven COVID-19 vaccines. Most residents of China are vaccinated with one of two inactivated-virus vaccines, either CoronaVac, made by Beijing-based company Sinovac, or BBIBP-CorV, made by the state-supported company Sinopharm in Beijing. The inactivated-virus vaccines are effective at reducing the risk of hospitalization and death1, but provide less protection than do the two mRNA vaccines developed by Pfizer–BioNTech and Moderna, which have been used widely outside China. “From data of all the COVID-19 vaccines available in the world, the mRNA technology seems to be better compared to other technologies,” says Feng Gao, a virologist at Jinan University in Guangzhou, China.

Chinese companies had planned to import the mRNA vaccine made by BioNTech and Pfizer. As early as March 2020, a Shanghai-based drug company, Fosun Pharma, struck a deal with BioNTech to sell its vaccine on the Chinese mainland and in Hong Kong once the regulators greenlit the product. But the approval of the highly effective vaccine is still pending on the mainland, despite data from a phase II trial in China showing that the vaccine triggers a robust immune response and is safe to use in adults2.

The reasons for the delay are unclear, but it’s likely to be political, says Yanzhong Huang, a specialist in Chinese health policy at the Council on Foreign Relations in New York City.

The Chinese government has accepted foreign clinical-trial data to accelerate drug-approval processes since 2017. And drugs that are required urgently, such as vaccines during a pandemic, can receive fast-tracked reviews. “There’s no other reason to explain the delay except techno-nationalism,” Huang says. He adds that the Chinese government probably prefers its first mRNA vaccine to be a home-grown jab such as ARCoV.

At least six domestic mRNA vaccines are in clinical trials. ARCoV, made by Suzhou-based biotechnology start-up Abogen Biosciences, is the furthest along, and is currently being evaluated in a phase III, multicentre trial in Mexico and Indonesia.

The small ARCoV trial, which was published as a preprint3 on 31 May and has not been peer reviewed, involved 300 adults in China who had received 2 doses of an inactivated-virus vaccine 6 months before getting the booster. The researchers found that after a shot of ARCoV, levels of neutralizing antibodies that target the Omicron variant of the coronavirus were four times higher than after a booster with CoronaVac. Neutralizing antibodies can stop the virus infecting a cell, and their levels are thought to be correlated with the strength of protection from vaccines.

“The results demonstrate a superior antibody boost of the mRNA vaccine versus an inactivated vaccine for the third dose,” says Ben Cowling, an epidemiologist at the University of Hong Kong.

However, although previous research has shown that mixing vaccine types can offer a stronger immune response4, “without comparing these different boosting strategies side by side, it’s hard to say which vaccine is better”, says Gao.

Whether the ARCoV vaccine “will receive official approval will depend on its phase III trial result. Not every mRNA-vaccine candidate will succeed”, Gao says. If approved, ARCoV might be used both as part of the country’s standard COVID-19 vaccination programme and as a booster, he adds.

Studies have shown that booster shots are vital for protecting people, especially older individuals, from severe disease and death when infected with Omicron5. But on the Chinese mainland, only 60% of people aged 60 and above have received a booster shot, which means that 100 million people in that age group have not. Booster coverage is much lower in those aged 80 and above — less than 20% of them had received a booster shot by March, when the Omicron wave began to ramp up.

Gao says that it is hard to tell whether unvaccinated people would accept an approved mRNA vaccine, given that the technology is new. “But from a scientific perspective, they should, because mRNA vaccines tend to induce a stronger immune response, especially in the most vulnerable people,” he adds.

For many countries, widespread uptake of COVID-19 vaccines has been a factor in governments deciding to open up and reduce movement restrictions, scale down mass testing and loosen isolation requirements. But researchers say that even with a highly effective mRNA vaccine, Chinese officials are unlikely to change their zero-COVID approach, which has managed to contain outbreaks for much of the pandemic, but has been less successful against the highly transmissible Omicron variant.

Officials have said little about opening up. But in April, Wannian Liang, the head of the National Health Commission’s expert panel, said that China could “defeat the pandemic” when cities have adequate medical resources and high vaccination coverage, especially in older people and other vulnerable groups. He also said the government would consider whether future variants had a lower death rate than those that are currently circulating when deciding to open up the country. But many virologists have cast doubt on the notion that the variants will become weaker over time.

Huang says that the government’s unwillingness to tolerate even low numbers of COVID-19 cases has created a dilemma: local officials have limited incentives to increase vaccination and booster rates, and instead direct their health-care workers to perform tasks such as mass testing. “The situation won’t change unless the officials change their mindset to allow infection to a certain extent,” he notes.

A more effective vaccine might alleviate the governments’ fears about loosening some restrictions. “With better vaccines and greater access to COVID-19 pills, China should worry less about COVID-19 overwhelming its health-care system. Maybe the government will change their mind then,” Huang says.

Andreessen Horowitz announces plans to invest in Adam Neumann’s new residential real estate company
The UK is getting a new prime minister — what will it mean for science?
U.S. Army hands over satellite operations to Space Force, but keeps a foothold in space
Recent Pandemic Lockdowns Gave Pacific Northwest Birds Freedom to Inhabit City Areas
Can It Be Too Hot To Fly?