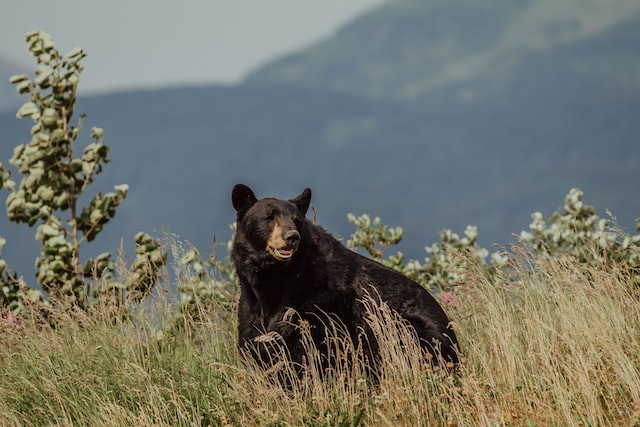 A Connecticut family’s birthday picnic ended in a major surprise when a black bear emerged from the woods and made a beeline for their cupcakes.

Rauf and Laura Majidian recorded the bear raiding a table of treats set out for their two-year-old son Cyrus’s celebration at their West Hartford home.

The enthusiastic ursine ate many of the cakes before sauntering away, ignoring numerous drink boxes and a basket of bread.

Laura Majidian told local station WTNH News, “I’m a bit afraid, I’m a little freaked out, but everyone is okay.”

She and other adults there grabbed up “armfuls of youngsters” who were playing outdoors when the bear emerged and took them within, as per The Guardian.

According to Rauf Majidian of HLN’s Weekend Express, the bear ignored attempts to scare it away.

Everyone was partying in the garden, he claimed.

Connecticut’s bear population has grown in recent years, with over 8,000 sightings already recorded to the state’s energy and environmental protection agency’s wildlife division this year.

According to the division, the black bear is an intelligent animal with acute senses of smell and hearing. It can sense the faintest fragrance of food, which may lead it to campsites and homes.

Black bears are often quiet, secretive, and wary of humans. They can lose their fear of humans if they consistently locate food near houses and places of human activity.

However, even when cubs are around, black bears are rarely violent toward humans, according to the agency.

A remarkable paleontological finding of 3.5-million-year-old bear bones demonstrates that this reputation is more than simply a cliché, as per Inverse.

Researchers from the Canadian Museum of Nature and the Natural History Museum of Los Angeles stated in Scientific Reports last December 2017 that they had discovered a near ancestor of current bears: a very large youngster who loved to gorge himself on luscious berries.

This primitive ursine bear, Portactos abstrusus, was somewhat smaller than current black bears and had teeth plagued with cavities, which the researchers believe is the oldest indication of a high-calorie diet in bears and demonstrates that “oral infections have a long evolutionary history” in animals.

It is a noteworthy discovery, in part because all other ancient fossil ursine bears, as well as certain current bear species such as the sloth bear and sun bear, are linked with lower-latitude, warmer environments, according to Carleton University biologist and research co-author Natalia Rybcynski, Ph.D.

The Ellesmere bear is significant because it implies that the ability to utilize the harshest, most northern woods on the globe is not a contemporary grizzly or black bear invention, but may have been a feature of the ursine ancestry from the beginning.

The discovery that this animal is a primitive ursine bear is the result of two decades of research.

Over the previous 20 years, bones from two people’s skulls, jaws, teeth, and skeletons were gathered from a place named Beaver Pond on Ellesmere Island, northern territory in the Canadian Arctic Archipelago.

This bear’s existence on Ellesmere Island would have featured 24 hours of darkness in winter and six months of ice and snow, so its berry-heavy diet would have been more than just comfort food for a bad winter – it would have been what the bear needed to bulk up, hibernate, and survive.