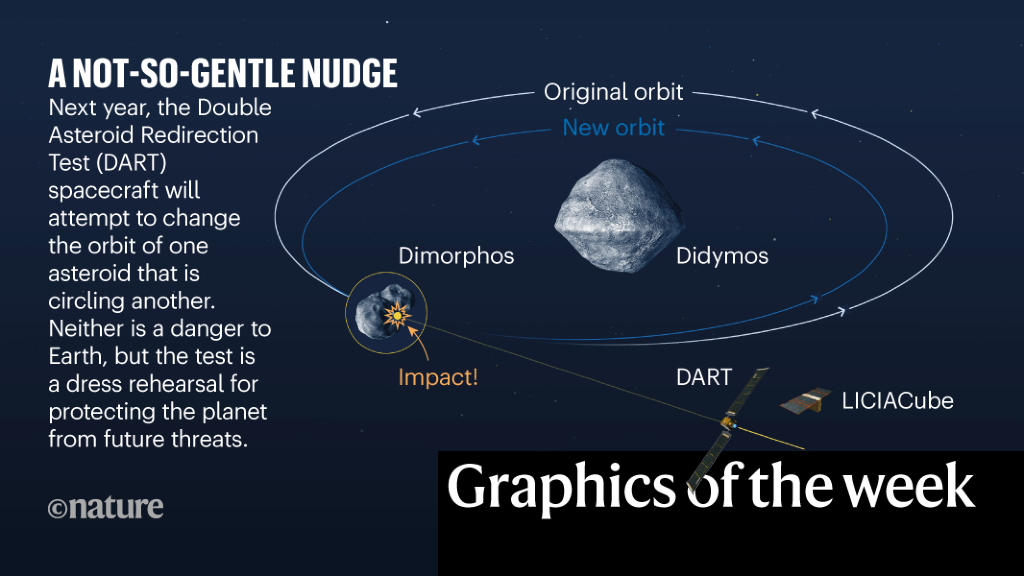 NASA has just launched a multimillion-dollar spacecraft with the aim of slamming it into an asteroid. Rather than being a catastrophic error, this will be the first test of a way to protect Earth from killer asteroids. Launched from California on 23 November, the spacecraft — the Double Asteroid Redirection Test (DART) — will target Dimorphos, an asteroid 160 metres wide that orbits a second asteroid called Didymos. Neither body is a threat to Earth, but researchers want to see whether they can change the trajectory of Dimorphos, long before they might need to use such a strategy to deflect a truly dangerous asteroid.

Smoke from wildfires is responsible for tens to hundreds of thousands of premature deaths around the world each year. Scientists want to know what it is in wildfire smoke that makes it more harmful to humans than other forms of pollution. It contains dozens of different particles, such as soot, and chemicals, such as carbon monoxide — but one of the main concerns for air-quality specialists relates to the tiniest particles in smoke, which measure 2.5 micrometres or less across (on average 1/40th the width of a human hair), and are known as PM2.5. According to Francesca Dominici, a biostatistician at the Harvard T. H. Chan School of Public Health in Boston, Massachusetts, no amount of fine particulate matter is safe to breathe, because it can penetrate deep into the smallest crevices of the lungs and enter the bloodstream.

The ordered form of a diamond’s crystalline make-up gives it a major flaw — it might be the hardest natural material, but it also shatters easily. Two groups of researchers have sought to get around this problem by creating atomically disordered diamond forms from buckyballs — soccer-ball-shaped C60 molecules. One group subjected buckyballs to high temperatures and pressures, and produced amorphous diamond (a) — a form of carbon that has the same types of chemical bond (sp3 bonds) as crystalline diamond, but that lacks atomic order. The other team used the same approach to make paracrystalline diamond (b), which can be thought of as a composite that consists of an amorphous carbon matrix containing nanometre-scale, severely distorted diamond crystals. The second group used computer simulations (c,d) to show how the pressurized buckyballs (which contain sp2 bonds, red) polymerize and then collapse to form a disordered structure that comprises mostly sp3 bonds (blue) as the temperature increases.

How to repair a baby’s broken heart

The 3D print job that keeps quake damage at bay

How to make macroscale non-crystalline diamonds