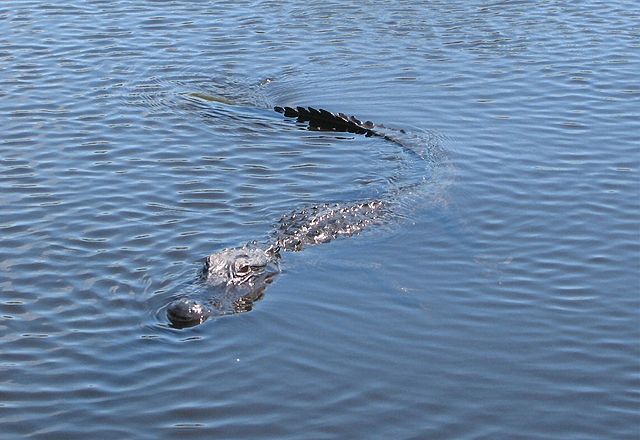 Wildlife officials euthanized an alligator swimming in a pond in Florida after they found that the reptile has been stabbed with a knife, which is still on its head.

According to Orlando news station WESH, the Florida Fish and Wildlife Conservation Commission (FWC) stated that it opened an investigation into the incident after images of the animal were shared on social media.

According to reports, the alligator was seen swimming in a pond in Deltona, a city in Florida that is northeast of Orlando.

The injured alligator was sought after by FWC officials on Friday of last week and throughout the weekend. The animal was eventually found, and when it was taken out of the pond due to the seriousness of its wounds, it was euthanized.

No information have yet been filed on the perpetrators, WESH reports

The Florida Fish and Wildlife Conservation Commission said photos of the gator were posted to social media, prompting an investigation.https://t.co/cZwirr6ceP

In all 67 of Florida’s counties, alligators can be found living in the state’s marshes, rivers, swamps, and lakes. FWC data shows that florida is home to approximately 1.3 million alligators from its latest count. There is a chance for alligator-human interactions and conflict because of the state’s growing human population and the fact that many residents are looking for waterfront homes or participating in water-related activities.

A permit is required in Florida for those who wish to hunt alligators. However, the demand for the licenses frequently outnumbers the available licenses. Additionally regulated and limited to certain dates, the hunt.

According to the University of Georgia, it is forbidden to randomly kill an American alligator in the wild in Florida or any other state unless it is part of a hunt.

FWC also published a reminder on its website to never feed an alligator. They added that if anyone sees one, they should keep their distance.

Read also: Two Alligators Kill a Florida Woman After Falling Into Pond at a Golf Course

Other reminders include keeping pets on a leash and far from the water and swimming only in designated areas during daylight hours.

Although alligators are protected, it has happened before that one of the reptiles was discovered with a knife lodged in its head.

Another alligator was discovered in a comparable state in Texas in 2019. Erin Weaver, who saw the animal swimming close to her Houston home, told Texas news station KTRK that she wanted to help the animal because it appeared to have a steak knife lodged in its head.

In that case, a park official expressed optimism that the alligator was not in discomfort. A few days after it was seen, an alligator search was conducted, but as of June 20 of that year, the animal had not yet been located, Newsweek reports.

Euthanasia, which means “good death,” describes methods used to end an animal’s life as painlessly as possible. The animal must pass away instantly or while it’s unconscious for it to qualify as euthanasia.

Euthanasia techniques should be used when possible because the animal would then suffer the least. In cases where euthanasia is unworkable, it is advised to employ humane methods of execution. The goal is to reduce the animal’s stress as much as allowable, regardless of the method of killing.