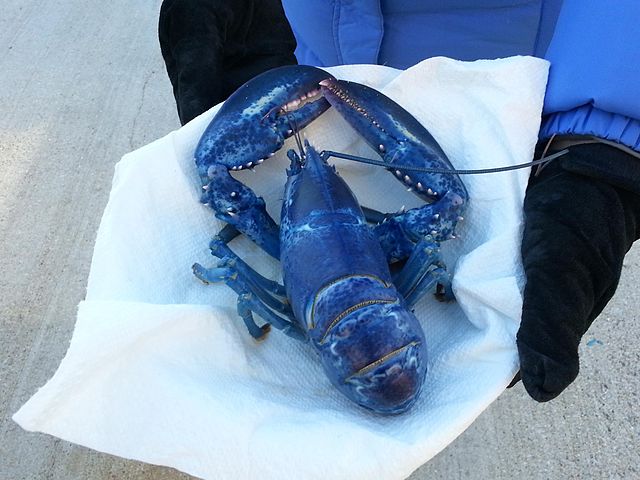 Perhaps one of the most exceptional catches, a rare blue lobster turned up in one of the traps that a fisherman has cast in the waters of Maine.

The 27-year-old excitedly showed the camera a rare blue lobster.

The original video has received a staggering 23 million views since being posted on Wednesday.

Haass claimed that he had never seen a blue lobster with such a vivid or attractive blue color. Fishermen may occasionally spot a lobster with a faint blue tint on its claw or tail, but that is it. He has never before seen one with this much blue all over it.

Although they are so uncommon that only one is occasionally caught across the state of Maine, Haass hopes to find another blue lobster.

It is such a rare find, he said, and he wanted to release the lobster back into the ocean. He estimated that the lobster to be around ten years old.

She cannot be kept, according to Haass, who noted on one of the videos that a different fisherman previously caught the same lobster and notched her tail twice.

According to Haass, many of his friends and more experienced fishermen who have been fishing for longer than he has never managed to catch a blue lobster, so he considers himself extremely fortunate to have done so.

He described his extraordinary catch as “1-in-2-million,” and added that it was likely one of the prettiest blue and white colors he had ever seen.

The Akron Zoo reported that there are one in every 2 million blue lobsters, in line with what Haass stated.

The Federal Trade Commission (FTC) made a similar observation.

Furthermore, it is virtually impossible for one to be caught, shipped, and saved –not enjoyed.

Read also: Researchers Made a Sustainable and Biodegradable Battery Out of Crab and Lobster Shells

Other Colorful Lobsters but Not Quite as Colorful

Haass acknowledged that despite the catch being extremely uncommon, it wasn’t the first time he had encountered a colorful lobster.

He claimed that the fish he caught ten years ago was not even close to this one’s level of blueness, which is why he was so thrilled about it. Even a regular lobster was held up next to it for comparison.

A few hours after the video went viral, he shared a follow-up in which he confirmed that he had released the lobster back into the water.

He confirmed in his follow-up post that the blue lobster had been returned to the water.

Additionally, he noted that it was unquestionably one of the bluest lobsters he had ever seen. There is occasionally a hint of blue in some lobsters, but the lobster he just caught was completely blue.

Haass also mentioned that the claws were white underneath the very pretty blue color.

He is curious how this would appear when cooked.

The fisherman let her go as he returned her to the water with the comment that perhaps the blue lobster could breed and produce some more blue lobsters, Newsweek reported.

Rivian shows off custom fleet of electric mobile service vans and R1T pickups in video walkthrough
Tesla aims to cut wildfire smoke exposure for Nevada Gigafactory workers, memo explains
Biden announces first round of funding for EV charging network across 35 states
How to Clean Up After Ourselves in Space
Here’s why US real estate investors should see climate change as an opportunity