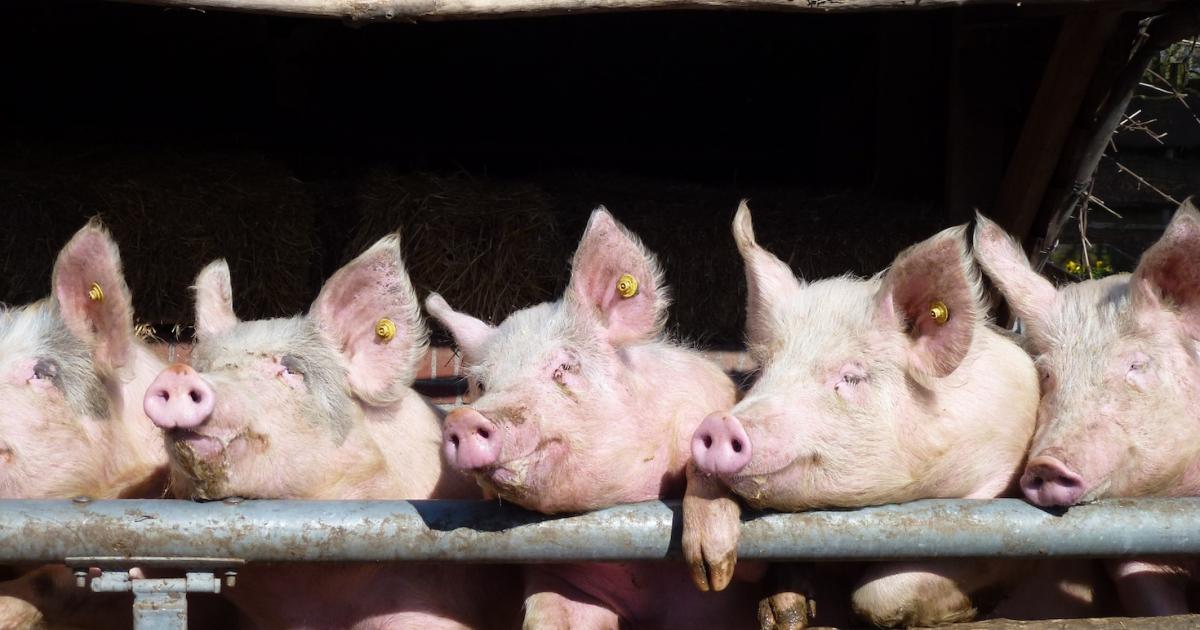 Long before Duplin and Sampson counties became the epicenter of North Carolina’s hog farming industry, Roberta McCalop’s family owned 42 acres of farmland on a dead-end road a stone’s throw from the county line. Raising a small number of hogs was a side business to growing tobacco and cotton for most families in the area, and in their free time the McCalops and their neighbors would sit on their porches, picnic in the shade of massive oak trees and play games in the yard.

But ever since industrial hog farms began swamping this region in eastern North Carolina three decades ago, those days are long gone.

On a sweltering summer morning, McCalop leans against her car and points to the grain storage facility across the road — rising several stories above the flat fields like a mini City of Oz — as a symbol of the invasion. Behind the silos, and largely hidden by tall rows of corn, sits one of North Carolina’s 2,100 “concentrated animal feeding operations” (CAFOS), many of them in the eastern part of the state in low-income communities of color. Deafening noise from tractor-trailers speeding along Highway 24 night and day, to and from the hog farms, makes conversation difficult, while the smell from the hog farms just a football field away — a nauseating mix of rotten eggs and decomposition — arrives seemingly out of nowhere. During the summer months, residents are often forced to stay inside with the air conditioning on full blast to escape the stench.

Now, McCalop, a media assistant in the Duplin County schools, has another reason to be concerned about the ever-encroaching agribusinesses. Pork-producing giant Smithfield is moving forward with the $30 million Grady Road project to convert swine waste from 19 hog farms into biogas. Methane captured from the waste pits will be transported through a 30-mile pipeline and processed in a new anaerobic digester system before being injected into an existing natural gas pipeline. The facility will be constructed within a few hundred yards of the McCalops, potentially exposing the family to even more air pollutants, including ammonia, hydrogen sulfide and various volatile organic compounds.

Smithfield touts this biogas scheme as a green energy solution that should be welcomed by the community, but critics say it is a classic case of greenwashing, intended to burnish the image of a company that has for years been the source of rampant water, soil and air pollution in the region. Smithfield and its partner in the biogas venture, the utility Dominion Energy, say that enough biogas will be produced at the Grady Road project to power 3,500 homes. Meanwhile, the vast hog CAFOS — nearly all of which are contracted to produce pork for Smithfield Foods — will still generate 10 billion gallons of hog waste a year. This vile slurry of feces and urine, which turns pink from bacteria, is stored in massive, unlined lagoons and sprayed onto feed crops as fertilizer, fouling the air and polluting groundwater. Residents say the CAFOs have turned this once-quiet part of the state into an industrial zone.

McCalop and other community residents, as well as numerous conservation groups, contend that instead of building a biogas pipeline and processing plant that will do little to reduce the hog industry’s pollution, Smithfield should instead make good on an agreement reached in 2000 with state regulators. Under that agreement, the company committed itself to devising a new method of treating hog waste that would replace the antiquated and flagrantly polluting system of storing the waste in unlined lagoons and then spraying it on fields. In addition, critics say that while the biogas initiative will have the benefit of trapping methane, the plan to cover the 19 lagoons to trap the gas will further concentrate the waste in those pits, worsening the impact on groundwater.

“This [process] does very little to address many of the known harms … and poses a higher risk because the waste stream itself is more potent,” said Will Hendrick, environmental justice advocate at the North Carolina Conservation Network.

North Carolina communities ‘have carried the burden of pollution from the lagoon and spray field system for too long,’ says one attorney.

“Smithfield promised North Carolinians that it would clean up its mess and install cleaner technology on its hog operations 20 years ago, and the company has failed to uphold that promise,” Southern Environmental Law Center attorney Blakely Hildebrand said in a statement earlier this year. “Communities in eastern North Carolina have carried the burden of pollution from the lagoon and spray field system for too long.”

Despite the growing problems associated with the hog operations, McCalop, 64, is determined to stay on the land that has been in her family for three generations. “This was my grandfather’s land,” she said. “I have always had such a thing about the old house.”

Nearly 30 years ago, Smithfield opened the world’s largest hog slaughterhouse in North Carolina on the banks of the Cape Fear River. Today, some 9 million hogs are raised in CAFOs in the state, most of them operated through contracts with farmers who grow the pigs for subsidiaries of the largest U.S. pork producer, Smithfield, sold in 2013 to Chinese giant Shuanghui Group (now WH Group) for $4.72 billion. Hundreds of hog operations have been sited in rural, impoverished Duplin and Sampson counties, where hogs outnumber people 40 to 1. The CAFOs in the two counties are overwhelmingly located in Black, Native American, and Hispanic communities.

Smithfield formed Align RNG (renewable natural gas) through a joint venture with Dominion Energy in 2018. The two companies announced plans to invest $500 million over 10 years to convert waste from Smithfield’s farms in North Carolina, Utah and Missouri into biogas. In North Carolina, the biogas will be collected by covering waste lagoons at 19 “grow finish” sites, where hogs are fattened before slaughter.

Align RNG declined to be interviewed but agreed to answer questions via email. Rather than responding specifically to nine questions, Kraig Westerbeek, vice president of Smithfield Renewables, said in a statement:

“Modern hog farming is a result of continuous research and innovation, which allows farmers to provide the best care for their animals, protect the environment and ensure food safety for consumers. The benefits of covered lagoons and digestors are well-documented and clear. They are capturing otherwise fugitive emissions and converting them to renewable energy, which is only positive for the environment and the local community. Our project in Sampson and Duplin Counties will reduce annual greenhouse gas emissions from participating farms by more than 150,000 metric tons each year. That’s the same as taking 36,000 cars off the road each year. Even skeptics of this project cannot deny this is a major environmental improvement.”

Westerbeek noted that numerous federal agencies, including the U.S. Environmental Protection Agency, have long encouraged the use of biodigesters, and that more than 20 other hog farm operations in North Carolina “have installed the same technology without any of the harmful impacts opponents have predicted.” The biogas project, he said, will also bring new income to North Carolina farmers by providing an additional revenue source.

But Ryke Longest, clinical professor of law and director of the Environmental Law and Policy Clinic at Duke University School of Law, said the key issue is not the use of the biodigesters but the far more important matter of Smithfield’s failure to properly treat the billions of tons of hog waste. He compared the process that Align and Smithfield are using to fitting a car with a tailpipe when a catalytic converter — in this case, modern waste treatment — is widely available.

Those living near hog farms complain of choking odors. One woman said her laundry drying on the line is often flecked with manure.

“They’re basically just putting a tailpipe on and not cleaning up the fundamental source of the pollution — the waste itself,” said Longest. “All that’s being removed from the farm is the gas, leaving behind these other two waste streams that need to be addressed. These systems were designed, in some cases, 30 or 40 years ago and were allowed to continue to operate under a grandfathering provision under some assumptions that have never really been tested.”

For those such as Roberta McCalop who live in close proximity to the hog farms, the burden of the operations is ever present. In addition to the choking odors, minute fecal particles from the lagoons and field spraying operations pollute the air; one resident who declined to use her name complained that her laundry drying on the line is often flecked with manure. Nitrogen from the unlined pits seeps into waterways and contributes to groundwater and well pollution, increasing the frequency and intensity of algal blooms and fish kills.

For decades, those living with the pungent smells, flies, buzzards, truck traffic and pollution have pleaded with state and federal regulators to remove or mediate the dangerous effects of the waste pits. Still, Smithfield has never followed through on its agreement to get rid of the lagoon and spray field system. A decade ago, the North Carolina General Assembly acknowledged the harm this method caused and said that Smithfield must employ new waste management technology to address those problems. The state has made little, if any, attempt to ensure that Smithfield meets its commitment.

“Our goal is to ensure that all farming operations are protected from frivolous lawsuits,” State Sen. Brent Jackson, a Republican who represents Duplin and Sampson counties, said at the time. “Due to recent judicial rulings, it has become blatantly obvious that the legislature must take action to clarify our intentions and correct these misguided rulings.”

The verdict was later reduced to $98 million.

In the past five years, Hurricanes Florence and Matthew, two “1,000-year” coastal events, not only killed dozens of people and drowned millions of hogs and poultry, but also flooded the waste lagoons, more than 500 of which are in flood plains.

Hendrick of the North Carolina Conservation Network noted that methane is only produced when the lagoons are covered to trap gas. A report from Colorado State University says capping the pits increases the levels of nitrogen in the remaining waste by up to 3.5 times, increasing the threat to nearby waterways.

Sherri White-Williamson, environmental justice policy director at the North Carolina Conservation Network, was born and raised in Sampson County and has spent recent years informing residents about the many environmental burdens placed on Black citizens.

“You’re going to have this long pipeline going through these communities and if something were to happen, like a fire or explosion, the emergency response is not equipped or prepared to respond,” said White-Williamson. “I let people know they needed to tell the State Department of Environmental Quality not to permit that thing because there’s nothing but Black folks over here, and they’re going to be harmed by that mess!”

Throughout their lifecycle, pigs are moved from breeding to farrowing to nursery facilities. They then are transferred to the so-called “grow-finish” facilities until they reach market weight and are shipped to the slaughterhouse. Waste is only being collected for biogas at the finishing facilities, which generate the most waste and the potential for more revenue from biogas.

Cape Fear Riverkeeper Kemp Burdette has spent more than a decade trying to protect the Lower Cape Fear River from the pollution discharge from CAFOs, which contains nitrogen and phosphorus, heavy metals and harmful gases. “We’ve been sampling streams that run off of the spray field of those facilities,” says Burdette. “One has had levels of bacteria and nutrients so high that it’s been placed on [an] EPA list of water bodies that are so polluted that they’re not able to meet their designated uses. It’s an indicator that these biogas facilities have real, negative impacts on water quality.”