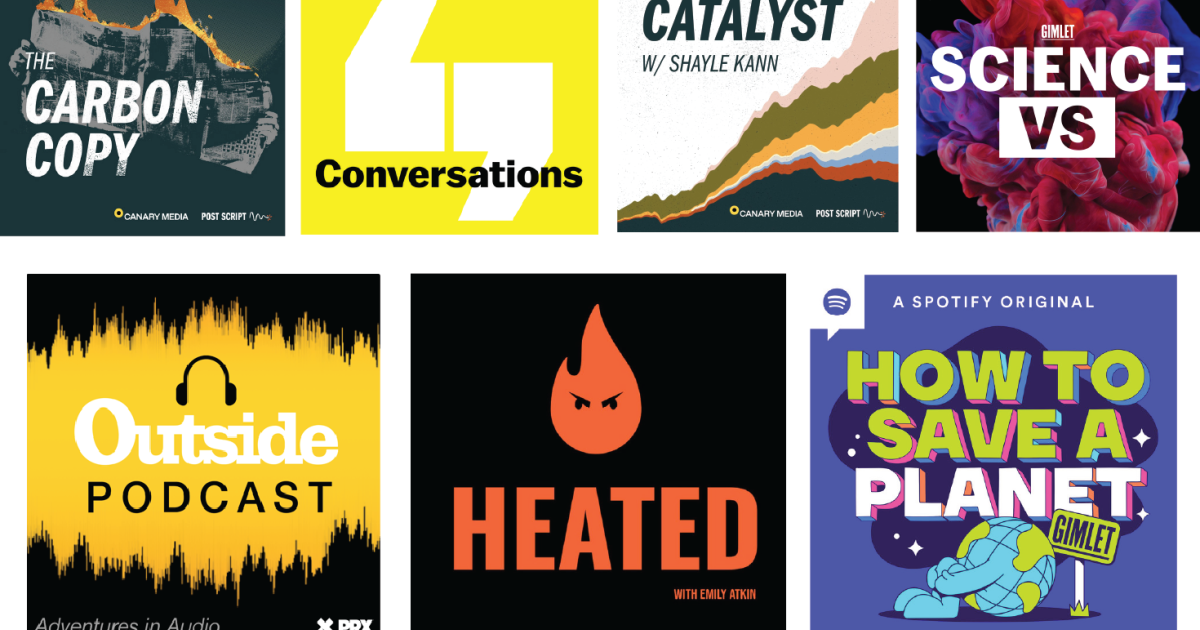 As the climate crisis affects more parts of our everyday life, even mainstream podcasts have started covering our favorite issues on a semi-regular basis. GreenBiz’s previous podcast lists (here and here) zeroed in on shows that specialize in sustainability. But in this decisive decade for climate change, I decided to expand our list to identify important climate episodes from non-climate podcasts. Along with more general podcasts increasingly covering climate, there has also been a ramp-up of new series or limited series that focus heavily on environmental issues.

Here are some great listens perfect for that upcoming summer road trip:

Alex Blumberg, of Planet Money and Gimlet fame, started this podcast in 2020 with an eye toward making combating climate change hopeful, entertaining and fun. The podcast focuses on solutions to the climate problem and identifies where we have made impactful changes. With so much depressing and infuriating climate news, How to Save a Planet can feel like a breath of fresh air.  Blumberg and (for the first few years before she left the podcast) his co-host Ayana Elizabeth Johnson, a marine biologist and climate policy expert, dive into topics such as kelp farming, the California carbon credits program and even try to identify a climate anthem.

Notable episodes (all on Spotify)

Before Ezra Klein took his namesake show to The New York Times and began focusing much more on politics and policy, the Vox version of the show liked to dip its toes in a variety of other topics including psychedelics, parenting and climate. Klein’s long-form conversations with experts, sometimes pushing upward of an hour and half, allowed him to pick at the nuances of arguments and peel back the layers in a way a shorter show would not allow. Klein was not afraid to insert his own well-informed positions into the conversation and asked the extremely specific questions about the climate crisis that demand answers.

Notable climate episodes (all on Spotify and Apple)

Sometimes the most radical and impactful climate action is just appreciating and sharing the outdoors. The Outside Podcast, a production from the historic magazine of the same name, spends most of its time telling stories of adventurers. But the outdoor industry has been a leader on climate change, understanding it is core to its business before many other sectors, and the episodes that deal with climate impacts are some of the most visceral audio narratives of the climate crisis told by the people on the front lines.

Notable climate episodes (all on Spotify and Apple):

Another Gimlet production, Science Vs, feels like listening in on a fact-checker’s process. While Wendy Zuckerman and her team cover much more than just climate issues, the episodes that do offer a great no-nonsense look into the facts and help break down the confusing language and conflicting reports.

You might already know and subscribe to Emily Atkin’s climate newsletter Heated. And if you don’t, you should. But her limited-run series of the same name from April 2020 tackled the two biggest crises of our modern world: the COVID-19 pandemic and climate change. The seven episodes show how the two issues are intertwined and how the pandemic was a signal for what’s to come for the climate catastrophe.

Notable episodes (all on Spotify and Apple)

For the strictly business people, this co-production of Postscript Media and Canary Media has investor Shayle Kann dig into the sustainability innovations that could overhaul the corporate world and our economy. Kann is very focused on climate tech, but everything from biowaste to battery materials to carbon removal is on the table for discussion.

Notable episodes (all on Spotify and Apple)

Another show from Postscript Media and Canary Media traces every story back to a climate issue. Host Stephen Lacey is like the Michael Barbaro of climate, and his show is like listening to The Daily for sustainability nerds. He looks at breaking news, current events and the daily quick news hits from a climate angle.

Notable episodes (both on Spotify and Apple)

Of course, don’t forget about GreenBiz’s own podcast, GreenBiz 350, where our intrepid leaders Heather Clancy and Joel Makower go over the top stories of the week and feature interviews with corporate sustainability leaders from every important sector. Listen to it on any podcast platform.